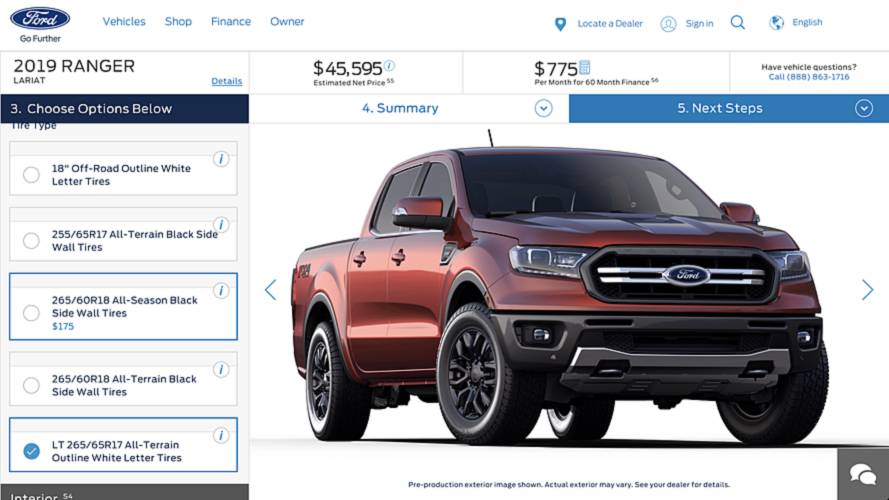 There are plenty of options, including the off-road-oriented FX4 package on four-wheel-drive trucks.

UPDATE: Sorry, folks. As expected, Ford has taken down the configurator. Plus, the listings weren't entirely correct. "This was a mistake and is being pulled down. There will not be a regular cab Ranger and pricing shown is inaccurate. Build and Price will officially go live next week," a company spokesperson told Jalopnik.

Based on this statement, it appears that at least the info about packages and accessories is accurate, even if some of the pricing info isn't correct.

The 2019 Ford Ranger will start at $24,000 (plus $1,095 for destination) for the base XL trim with rear-wheel drive and a regular cab body, according to the configurator. The clever folks at Off-Road.com discovered that by manually typing in "Ranger" on the Blue Oval's configurator site that the info about the truck was available, despite no link actually pointing to it.

Ford hasn't yet officially confirmed the Ranger's pricing. Since the company doesn't yet link to the Ranger configurator directly, it's possible that the details there are still subject to change. Still, this is our best info yet about the packages and equipment available for the new pickup.

The Ranger Gets Ready To Work:

See How The Ford Ranger's Price Stacks Up To Competitors
⠀

The 2019 Ranger will be available in XL, XLT, and Lariat trims and in Super Cab, and four-door Super Crew bodies. The regular cab will only be available for the XL. All of them will come with a 2.3-liter turbocharged four-cylinder and ten-speed automatic, and four-wheel drive will be an option.

Customers will be able to choose from eight exterior colors, including Hot Pepper Red for $395 and White Platinum for $595. Inside, there will be an option between Ebody or Medium Stone upholstery in cloth on the lower trims and leather for the Lariat.

Ford lists plenty of options for the Ranger. The four-wheel-drive trucks will be available with the FX4 Off-Road Package for $1,295 that will include an electronic locking rear differential, exposed front tow hooks, exposed steel bash plate, an off-road screen for the infotainment system, off-road-tuned suspension, front air dam delete, skid plates terrain management system, trail control, and an FX4 decal truck's side.

For a different look, there will be Chrome and Sport Appearance Packages. The former loads up the body with shiny accents, including the grille surround, bumpers, and window trim. The latter version uses black pieces for a darker appearance.

Other upgrades will include a $795 technology package with adaptive cruise and navigation. The Lariat will be available with a B&O seven-speaker stereo with an HD radio. Plus, there will be a variety of accessories to pick from like 17- and 18-inch wheels, running boards, and splash guards.

The Ranger will go on sale in the fourth quarter of 2018.