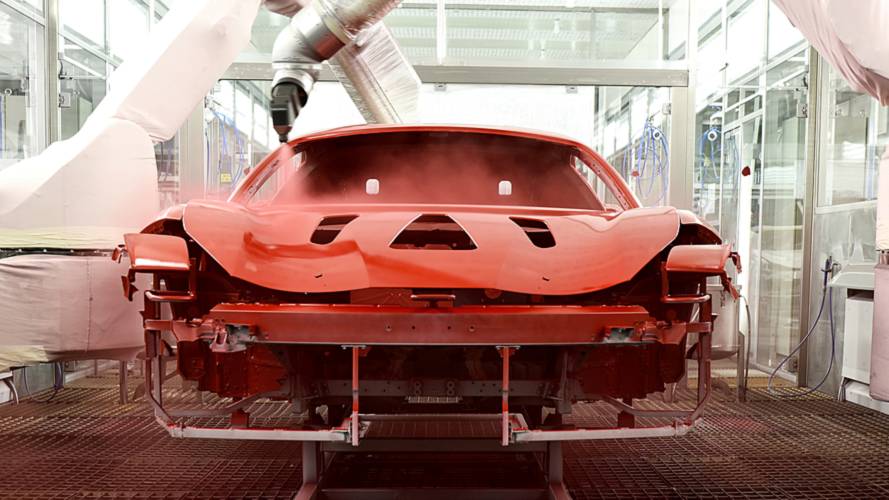 The company can now bake carbon fiber and compost components with the body shell.

Look at a 25-year-old red car and check out the paint. The paint could look brand new – maybe it has a few scuffs and needs a good wax, but otherwise, it’s serviceable. Or, the paint can look faded with peeling clear coat and paint flaking. This depends on the automaker. Automotive paint hasn’t always been the tough, protective outer shell of the automobile. Some automakers stumbled trying new paint processes while others played it safe and adopted new technologies once perfected. Ferrari is one automaker diving head first into a new low-bake paint technology that looks to lower energy costs while maintaining paint quality – which is vital to an expensive supercar marker with an expressive paint palette.

Paint News You Need To Know:

Ferrari, partnering with PPG, will be the world’s first automaker to adopt the new Low Cure clear coats paint technology. It’s a two-component paint system that incorporates a specially formulated clear coat. This allows the car to be baked at 100 degrees instead of 150 degrees. The Low Cure resins contain a new hardener that enhances the paint’s toughness to water and other contaminants.

One of the most significant advantages isn’t the lower cure temperature. The new paint technology will allow Ferrari to bake both carbon fiber and compost components with the body shell. This means the automaker will be able to achieve color uniformity across various body components. The new technology also allows the company to produce no fewer than 61 base coat colors. This is done by combining a metallic base coat with a gloss or matte pigmented clear coats.

This isn’t the first new paint technology Ferrari has adopted. In 2004, the company became one of the first companies to introduce a water-based paint system. Both that and its new low-cure paint will help lower energy costs and enhance sustainability.

Ferrari isn’t known for terrible paint, so while new technologies can lead to unexpected results, it’s a safe bet the automaker did its due diligence before jumping on board.

This move further underscores Ferrari’s ongoing commitment to the pursuit of both excellence and sustainability. In 2004, it became one of the first companies in the world to introduce a water-based paint system which significantly lowered the environmental impact of its cars.

The new two-component paint system incorporates a specially formulated clear coat which makes it possible for the car to be baked at 100 degrees instead of 150 degrees, thereby cutting energy costs and enhancing the sustainability of the process.

Additionally, the new solution makes it possible to bake carbon-fibre and composite components together with the bodyshell, resulting in colour uniformity between the various body components.

Thanks to the new technology, Ferrari has industrialised a process to produce no fewer than 61 different basecoat colours by combining metallic basecoats with a gloss or matte pigmented clear coat.