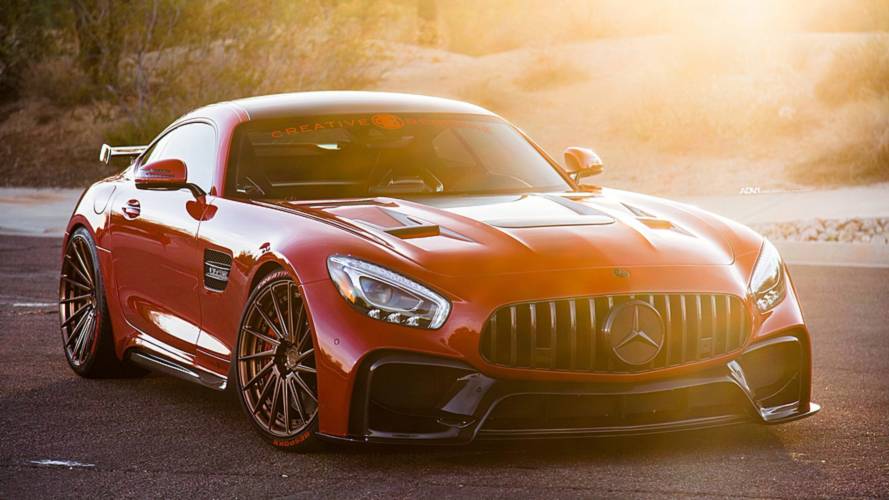 The glass engine cover is a nice touch.

The Mercedes-AMG GT R is arguably the angriest-looking production car to carry the three-pointed star right now, outside of the Project One. However, the tuning scene never sleeps and can give the lesser S version a complete transformation that will make the R look a bit restrained. Creative Bespoke decided to do just that by slapping on a carbon fiber aerodynamic body kit to make the GT S a real head-turner you’ll either love or hate.

The carbon fiber package is more than just some subtle add-ons you usually see with nearly all aftermarket projects. It consists of completely new front and rear bumpers, along with a menacing front grille also made from carbon fiber. Heck, even the badge is carbon fiber, as are the beefy side skirts. However, the piece de resistance is at the back where the massive wing made from carbon fiber further accentuates this is far from being a stock GT S.  The new wing not only looks great, but it also boosts the coupe’s downforce and improves handling.

Reminder: The AMG GT Coupe has gained a four-door sibling:

While glass engine covers are usually found on cars where the powertrain is mounted at the back (there are a few exceptions), the GT S has eschewed its standard metal hood to make room for a custom piece featuring a glass section. The tuner says the Chevy Corvette ZR1 served as a source of inspiration for this nice touch making the GT S stand out.

Gone are the stock alloys as these had to make way for a custom ADV.1 Wheels featuring a directional spoke design and measuring 20 inches for both front and rear axles. The shiny shoes have a polished matte brown finish and are complemented by H&R sport springs for an extra visual impact by bringing the GT S closer to the road.

No word about how quick it is, but given the extra punch and the carbon fiber diet, it might be run to 60 mph (96 kph) in less than the 3.5 seconds needed by the R. The soundtrack delivered by the AMG engine should also be a bit better thanks to the new exhaust.

If you would rather have a standard GT positioned above the current range-topping R, Mercedes-AMG is planning not only a track-focused Clubsport due likely this year, but also a Black Series scheduled to arrive in 2020.