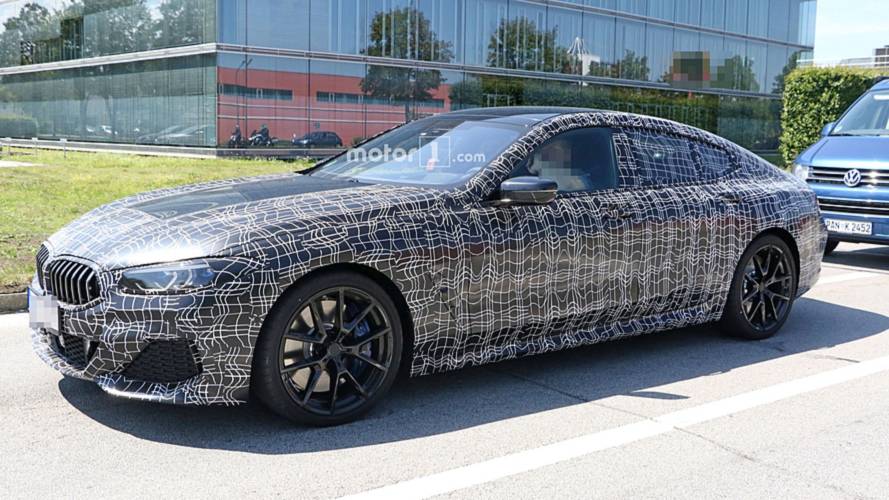 We see what appears to be a standard model and a high-performance M version.

BMW is going all-in with the new 8 Series, and now we have our very first look at the new four-door model testing in the real world. BMW calls it the Gran Coupe – same as the concept we saw earlier this year – but we suspect most people will recognize this car for the sedan it is. Lest you think this will be just an 8 Series with a couple smaller doors added, it will feature a stretched version of the coupe’s already sizeable platform.

The stretch means rear-seat passengers will have more leg room, and we fully expect to see some new luxury items plugged in as well. We doubt there will be space for extending footrests and tables like you find in a Mercedes-Maybach, but this latest Bimmer isn’t necessarily designed to be a massive luxo-flagship. That role is expected to be filled by soon-to-come X7 SUV, but that doesn’t mean this grand touring four-door will be devoid of extravagant creature comforts.

Perhaps of more significance is the inclusion of an M model in four-door guise. This group of spy shots actually captures two different cars, and the one with dark wheels sure looks like it’s sporting serious performance upgrades. While the standard 8 Series Gran Coupe should compete with the Audi A7, and Mercedes-Benz CLS-Class, the M8 Gran Coupe will go after the RS7 and Mercedes-AMG GT 4-Door Coupe. As such, we’re expecting the 4.4-liter biturbo V8 to take residence under the long hood, making over 600 horsepower (447 kilowatts) to give the driver and all passengers a soul-stirring ride.

We aren’t yet sure when the stretched 8 Series will officially hit the road, but our instincts say it will probably happen next year as a 2020 model. Having seen the concept up-close earlier this month at the Goodwood Festival of Speed, we suspect it will definitely be worth the wait.