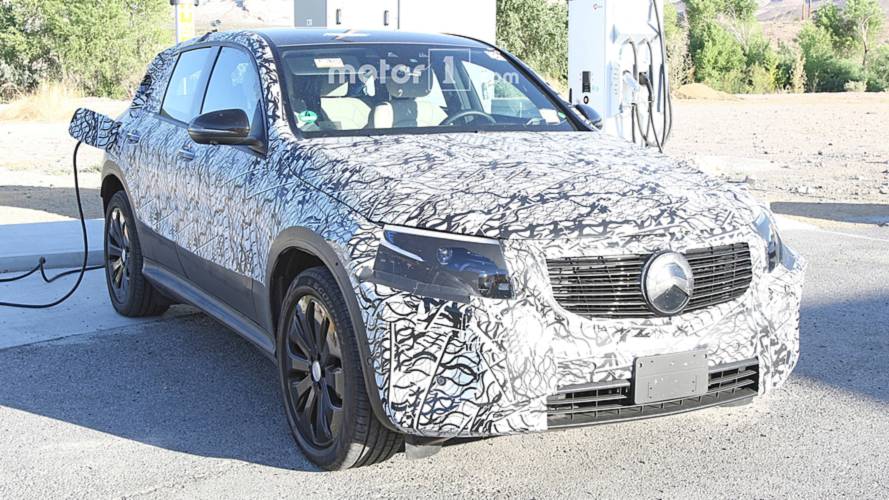 If the powertrain remains like the concept, then expect a high-performance electric SUV with 402 horsepower.

Mercedes will enter into the burgeoning segment of electric, premium crossovers with the launch of the EQ C in Stockholm, Sweden, on September 4. Until then, these spy shots are our best look yet at the upcoming EV before it officially debuts in a few weeks. This test mule was charging while undergoing hot weather evaluations in Death Valley, California.

The EQ C has a look that should make it look good alongside the rest of Mercedes' SUV lineup, especially the GLC-Class. The EV uses a traditional two-box shape but with very smooth lines. To break up the curves, there is a set of angular headlights at the front.

Mercedes EQ C Gets Closer To Its Debut:

Mercedes hasn't confirmed the EQ C's production details yet. In concept form, it packed a total of 402 horsepower (300 kilowatts) from a pair of electric motors – one at each axle for all-wheel drive. This setup allowed for acceleration to 62 miles per hour (100 kilometers per hour) in less than 5 seconds. The 70-kilowatt-hour battery pack provided at least 250 miles (400 km) of range.

Earlier in the EQ C's development, Mercedes staged a public testing process that included covering the mules with camouflage featuring the hashtag #switchtoEQ. The automaker will eventually broaden the sub-brand to include an entire range of EVs. For example, a flagship sedan under the EQ S moniker will reportedly arrive between 2020 and 2022, and a C-Class-sized version will reportedly join the range in 2022.

While Tesla largely pioneered the premium electric crossover segment with the Model X, European luxury brands have been preparing their own entries into the market. The EQ C, Jaguar I-Pace, and Audi E-Tron will be on sale in the U.S soon. The BMW iX3 won't be too far behind either.