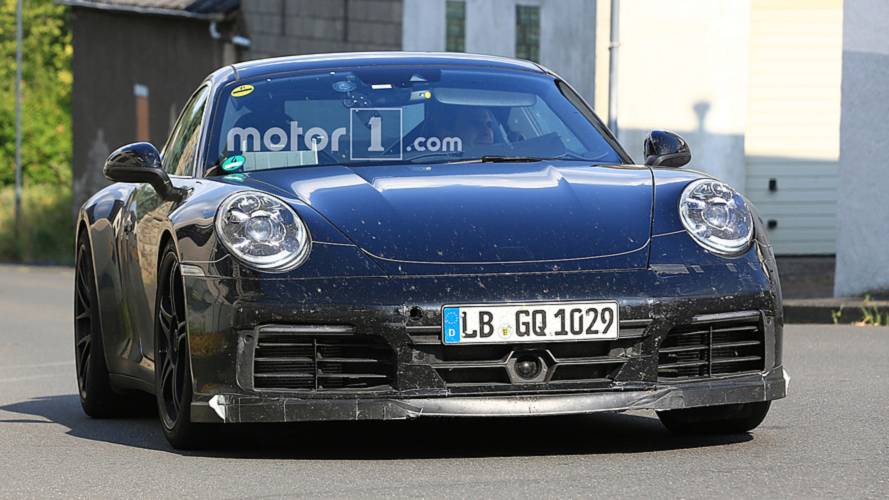 Development appears to still be underway because the wheels are mismatched and the rear bumper is cut up.

Porsche has a massive selection of variations for the next-gen 911 on the way, and a new batch of spy photos could be our first look at the new iteration of the GTS. Like the current model, it would sit above the Carrera S but wouldn't offer the performance of the 911 Turbo.

In comparison to earlier spy shots, this test mule (above left) is definitely something different. The front fascia is more aggressive and features an array of more prominent slats in each intake. The lower splitter is also more prominent. Porsche covers these panels with black tape, but it doesn't appear actually to conceal anything.

In profile, this test mule features a mismatched set of wheels. The ones at the front have five sets of dual spokes, and the units in the rear have a Y-spoke design. Both of them have a gunmetal finish. The brake discs appear to have a larger diameter than on the standard 911, too.

This test mule features lots of tape and cut-out sections in comparison to the evaluation vehicle for the standard 911. The changes suggest the GTS would eventually have a more aggressive exhaust, but the final pieces aren't on this one. Concealment over the taillights hides the section's shape. However, a recent spy shot revealed the final design.

The GTS would share its biturbo flat-six engine with the standard 911 Carrera trims but likely with a slight power boost. Expect some of Porsche's performance options to be standard, like adaptive dampers or the Sport Chrono package.

The new 911 will reportedly debut later this year and will be on sale in 2019. The GTS and Turbo trims probably won't be available from launch, though.