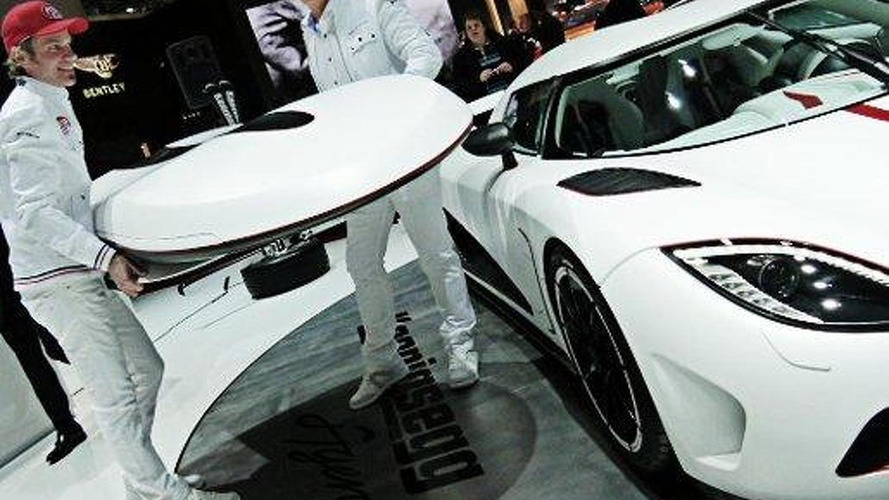 Swedish super car manufacturer Koenigsegg has unveiled the production version of the Agera and the even more powerful Agera R at the Geneva Motor Show.

Swedish super car manufacturer Koenigsegg has unveiled the production version of the Agera and the even more powerful Agera R at the Geneva Motor Show. With the pre-production Agera first revealed as a concept one year ago, it was powered by a 4.7-liter twin-turbo V8.

The production Agera is powered by a Koenigsegg developed, aluminium/carbon fiber, dry sump, 32 valve, 5.0-liter, twin-turbo, V8 engine which produces 940 PS (927 bhp / 691 kW) and 1100 Nm (811 lb-ft) using 95 octane petrol. As a testament to its advanced design, no other production engine in the world, regardless of car type, has the same amount of power potential while achieving an EU cycle CO2 average emissions rating of 310g or fuel consumption of 14.7 liters per 100 km (16 mpg US / 19.2 mpg UK). As a result, the Agera meets all the required emission standards in the world.

The Agera R on the Koenigsegg show stand (production car #83) is inspired by the legendary Speed Racer theme, as specified by the owner of the car. Another unique feature of this Agera R is the custom carbon fiber roof box co-developed with Swedish roof rack manufacturer, Thule.

The transmission, co-developed by Koenigsegg and Cima, is the world's first 7-speed dual clutch system for a single input shaft gearbox. It uses both dry and wet clutch systems. The result is a very sporty, smooth and extremely fast shift. Compared to a traditional DCT systems, this gearbox is lighter, smaller, has less moving parts and gives a more distinct shift feel, with almost no interruption to the acceleration.

The Agera is all about the details so check out the press release below for the full story.