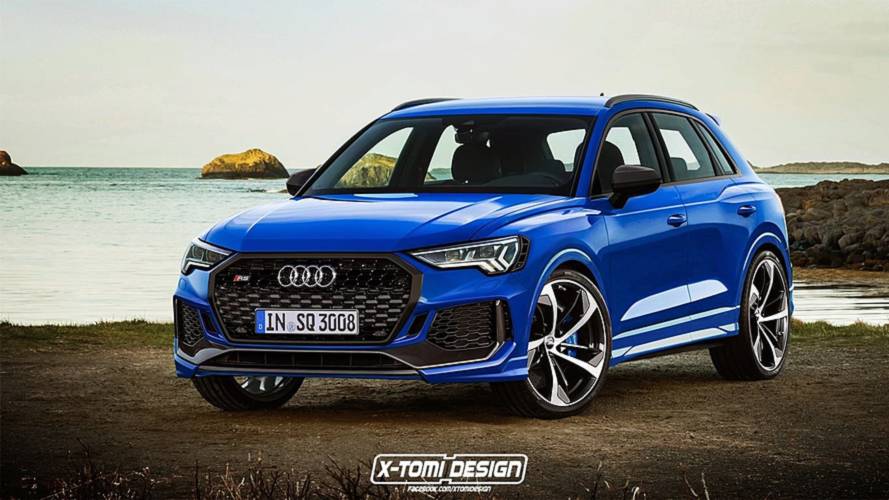 Can we please have one in America?

We’ve only just become acquainted with the new Audi Q3, and already there’s a rendering of what the people mover would look like wearing an RS suit. X-Tomi Design is quick on the draw with some exquisite photoshop work to the fresh-faced SUV, and we’ll be the first to admit it looks cool. Very cool.

Check out the new Audi Q3:

How does one convert a standard Q3 into a fire-breathing RS model? It starts with a slightly lower ride height, paired with some larger diameter wheels to fill in that SUV fender gap. The next step is to apply a sexy shade of blue and kill all the chrome, except of course for the all-important rings in the grille. Speaking of the grille, this rendering swaps in black honeycomb RS treatment to replace the vertical slats found on the new Q3. From there, the Photoshop artistry steps up a notch with a well-crafted front fascia that looks very reminiscent to an Audi RS3. Take a look for yourself in this comparison – see what other changes you can find.

The new Q3 by itself looks a bit more aggressive compared with the outgoing model. It’s slightly longer, a touch wider, and with a bit of flair to wheel arches, it exudes something of a muscular presence. One thing we don’t yet know is how much power Audi will install under the hood. Three powertrains are confirmed globally for the Q3; currently, the small crossover offers a 2.0-liter turbocharged four-cylinder good for 200 horsepower (149 kilowatts) in the U.S. market, so we expect a minor upgrade from there.

This rendering doesn’t feature a typical Q3, however. This is an RS model, and though such a monster is currently forbidden fruit in North America, the 2018 RS Q3 lives elsewhere with a turbocharged inline-five making 362 hp (270 kW) sent through a seven-speed dual clutch gearbox. Combined with beefy brakes and tighter suspension, it’s a small crossover with serious bite.

Will Audi see fit to send a new RS Q3 to the States? After seeing this render, we seriously hope so.