Ford Ranger XL Spied Getting Out Of Bed In Dearborn 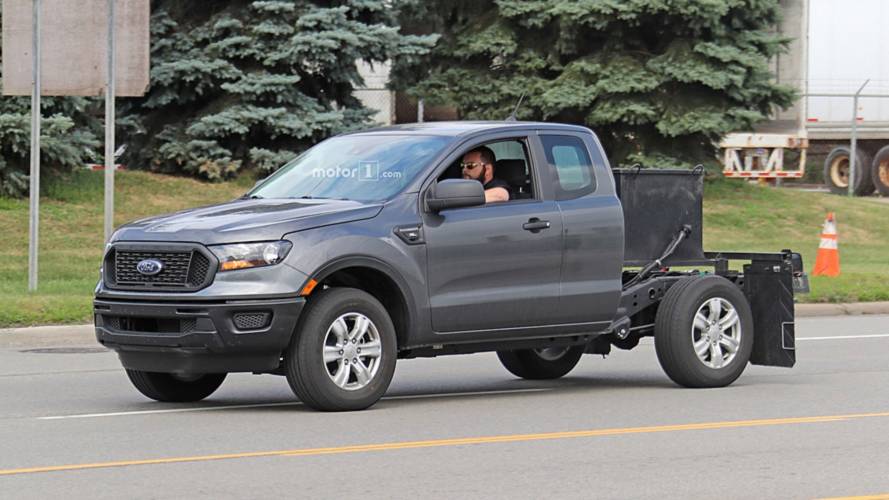 And it's hiding an XLT window sticker.

As we eagerly await the debut of the new Ford Ranger, the Blue Oval seemingly can’t stop testing its tiny pickup truck. Our spy photographers regularly capture it on public roads near headquarters in Dearborn, Michigan. Last month we saw a right-hand-drive, candy-apple-red Raptor completely uncovered, and now an entry-level XL model was spotted out in the open, sans bed.

Obviously this is no Raptor; the images show what appears to be an XL Ranger chassis cab with only a few basic features. The black, plastic grille, halogen headlights, and six-spoke wheels are a departure from what we’ve seen on the Ranger thus far. But our photographer did manage to uncover something else interesting: the window sticker for an XLT model.

The window sticker lists features like standard daytime running lights, halogen headlights, and trailer sway control, among others. Listed on the optional features section are things like 17-inch off-road tires, a Sync 3 infotainment system, keyless entry, and a chrome appearance package, among others. Unfortunately it doesn’t list a price.

We don’t know exactly what kind of engine is hiding under the hood, but a four-cylinder is the most likely candidate. The current Ford Ranger Raptor comes powered by a biturbocharged 2.0-liter diesel engine producing 211 horsepower and 369 pound-feet of torque. Expect less power from the XL and XLT models, of course.

The Ranger is coming:

Like its larger F-150 sibling, expect the Ranger XLT to be slotted just above the base XL model. The XL Ranger will be more suited for work than play, while the XLT will be the entry point for most customers. Even with the lower-trim levels, though, it’s good to see that Ford will still offer plenty of options. We can't wait to see the pickup in dealers in just a few months.