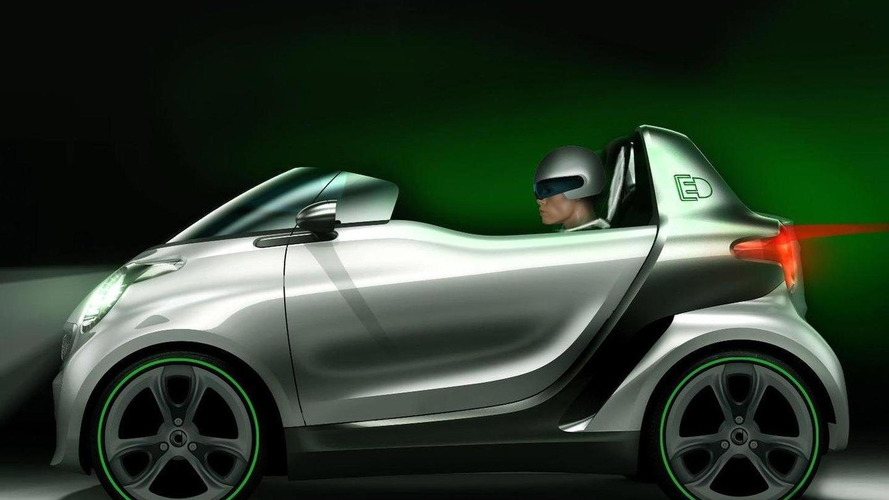 Previews the design of the next-generation fortwo and resurrected forfour five-door models.

The roofless design is reminiscent of the Smart Crossblade from 2002 but don't be fooled, this is only a diversion of its true purpose - to preview the design of the next-generation fortwo and resurrected forfour five-door models.

In an interview with Mercedes head of design, Steffen Kohl told Auto Express, “Look at the fullness of the car’s exterior surfaces. This is important and will be reflected in future production models”.

Exterior features include a honeycomb mesh grille, LED headlamps, photovoltaic solar cells in the base of the windscreen and a hidden plug-in socket under the smart badge on the rear which leads down to a lithium-ion battery.

Like current smart models the interior pursues a "downsized premium" design as seen in the exposed mounting bolts in the door panels, center console and steering wheel. However, the shiny plastics with brushed aluminum and brown and green leather accents focus your attention elsewhere.

For the gadget saavy, smart has included a smart phone dock display console on the passenger side of the dash board. Surely real world safety concerns emerge as it forgoes an airbag and acts as an object that could cause head injury in a frontal collision, but this is just a concept and has no intentions of making it to production, according to Smart boss Dr. Annette Winkler.

An electric powered scooter and bicycle will be accompanying the Forspeed in Geneva. They are expected to hit the market in early 2013 followed by the next generation fortwo and fourfour models in 2014.