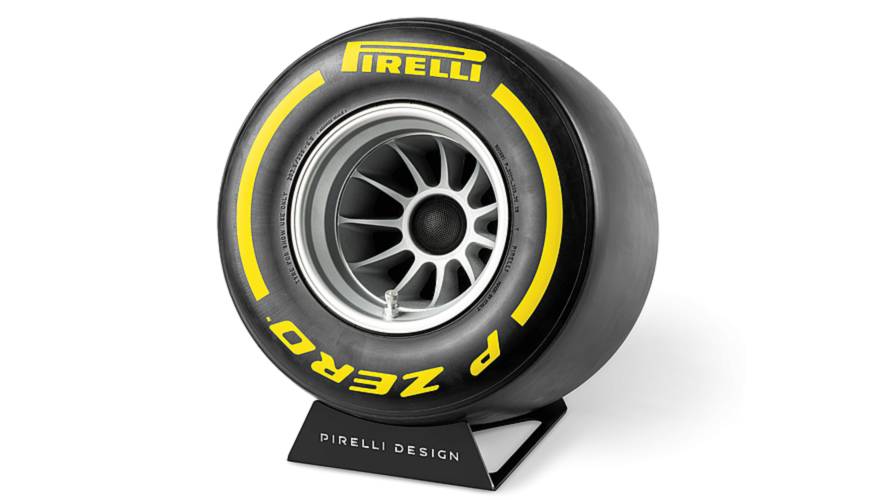 It's available in nine colors to match the various F1 tire compounds.

Pirelli Design puts some music into its tires with a new Bluetooth speaker that looks like a half-scale version of the wheels that Formula One teams use during aerodynamic testing in wind tunnels. The gadget is available in nine colors that match the look of the various tire compounds that F1 teams use.

Check Out These Auto-Themed Speakers:

The audio system specialists at Ixoost are handling the speaker's production. They feature a 100-watt digital signal processor, 3.9-inch (100-millimeter) midwoofer, and 1-inch (25-millimeter) tweeter. Bluetooth 4.0 connectivity lets the speaker connect wirelessly to a variety of audio devices. At 13 inches (330 millimeters) in diameter and a depth of 7.9 inches (200 millimeters, the device should fit anywhere. However, the 2,400-euro ($2,800 at current exchange rates) price makes this gadget a rather hefty investment. Plus, folks in a longterm relationship might have a challenge convincing a significant other to display a wheel-shaped Bluetooth speaker rather than a more conventional design.

Ixoost is very familiar with building very expensive, automotive-themed sound system. For example, the firm launched the Esavox speaker in late 2016 that featured Lamborghini branding and incorporated portions of the automakers exhaust into the design. It featured a 15-inch subwoofer, two 6.5-inch full range speakers, two 8-inch woofers, and two 1-inch tweeters. The beastly setup weighed 117 pounds (53 kilograms) and cost 19,900 euros (the equivalent of $21,234 at the time).

Porsche Design offers a few somewhat more affordable automotive-themed speaker systems. Its $3,500 911 Soundbar looks like the exhaust from a 911 GT3 and packs 200 watts of output. Conversely, the tinier 911 Speaker is $599 and looks like a pair of small tailpipes.

Even Bentley has offerings in the automotive-inspired home speaker market. The Mu-so and Mu-so Qb feature boxy shapes with 450 watts and 300 watts of output respectively. Neither are cheap, though, because the Mu-so goes for 1,195 pounds ($1,575) and the Qb costs 750 pounds ($990).

Pirelli Design launches motorsport inspired audio speaker,
with P ZERO™ Sound technology
Pirelli’s Wind Tunnel Tire speaker is made in collaboration with IXOOST
July 24, 2018 – Pirelli has joined forces with IXOOST, an Italian firm from Modena that specializes in
high-end car audio, to create a new sound experience inspired by motorsport. The result is an exclusive
hi-fi system that includes a cutting-edge Bluetooth™ speaker within a replica Wind Tunnel Tire: made
by Pirelli for Formula 1™ Teams to conduct aerodynamic testing.
The wind tunnel is a vital tool for Formula 1™ Teams to study every aspect of air flow, in their unending
search for optimal performance – where the tires play a vital role as well.
And from the scale-model F1™ Wind Tunnel tire, PIRELLI P ZERO™ sound by IXOOST was born.
This is a mini tire that sets new standards of design and technology, traveling its own road when it
comes to music.
The acoustic system includes a powerful amplifier with a 100-watt digital signal processor and is
equipped with a 100-millimeter midwoofer as well as a 25-millimeter silk tweeter. The whole system is
made entirely in Italy by IXOOST, featuring hand-crafted unique touches and attention to detail.
With the most advanced 4.0 Bluetooth™ APTX technology, PIRELLI P ZERO™ sound can connect
wirelessly to smartphones and other compatible devices, enhancing the audio signal in wireless mode
and ensuring the best possible playback.
PIRELLI P ZERO™ Sound is available in nine different colors that reflect those used to distinguish the
different racing compounds. Thanks to its appealing shape and extremely compact dimensions (330
millimeters diameter and maximum depth of 200 millimeters), this inspiring design piece will fit in
anywhere, lending a unique and original touch to its surroundings.
The new speaker was previewed at the FORMULA 1 PIRELLI GRAND PRIX DE FRANCE 2018.
PIRELLI P ZERO™ sound will be seen in the F1 Pirelli Hot Laps garage during other Grand Prixs this
year.
---
IXOOST creates exclusive audio systems entirely made in Modena with the same techniques and passion that
characterize the world’s most famous supercars. These extraordinary audio solutions from Matteo Panini form a bridge
between the automotive and aeronautical worlds, in the form of unique objects. Every single product is crafted by hand,
also integrating exhaust pipes from supercars. This is the inspiration behind the brand, echoing the word ‘exhaust’. For
more information: www.ixoost.it