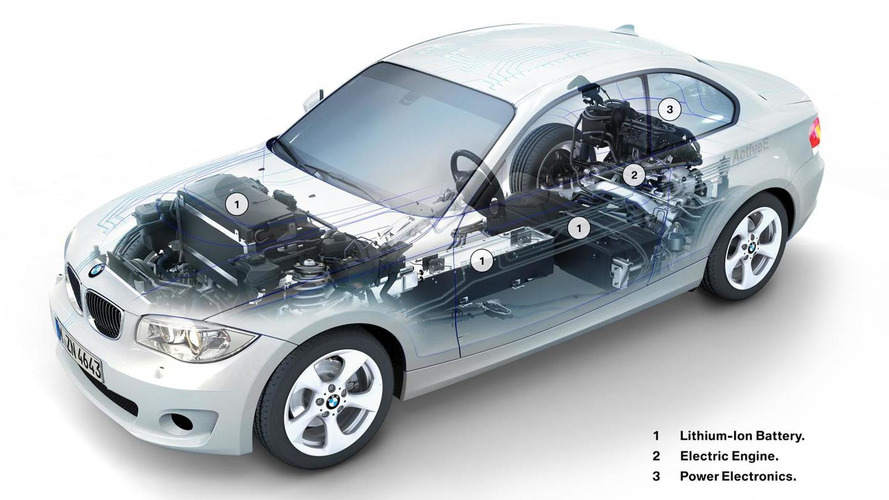 BMW has unveiled the 2012 ActiveE, ahead of its debut at the Geneva Motor Show.

Essentially a technological preview of the 2013 Megacity (MCV), the ActiveE is based on the 1-Series Coupe and features "the drive components and battery technology that will be used in the MCV." Speaking of which, motivation is provided by an electric motor that produces 170 hp (127 kW / 172 PS) and 184 lb-ft (249 Nm) of torque. It enables the car to accelerate from 0-60 mph in "under nine seconds," hit a top speed of roughly 90 mph (145 km/h), and travel approximately 100 miles (161 km) on a single charge. When the lithium-ion batteries are depleted, they can be fully-recharged in four to five hours with a rapid charger.

Inside, a few scarifies have been made as part of the EV conversion. The cabin still seats four occupants, but cargo capacity has been decreased to seven cubic feet (198 liters) which is down from 10 cubic feet (283 liters). Regardless, the interior comes nicely equipped with Dakota leather upholstery, Alpine White trim, a revised instrument cluster, and a new eDrive display. Furthermore, BMW offers a MyRemote app which allows iOS users to remotely lock / unlock doors and check battery / charging status.

Over 1,000 ActiveEs will be produced and they will be offered for lease this fall in Los Angeles, San Diego, San Francisco, Sacramento, New York, Boston and the state of Connecticut. European and Chinese consumers will also be able to lease the ActiveE, but specifics haven't announced as of yet.