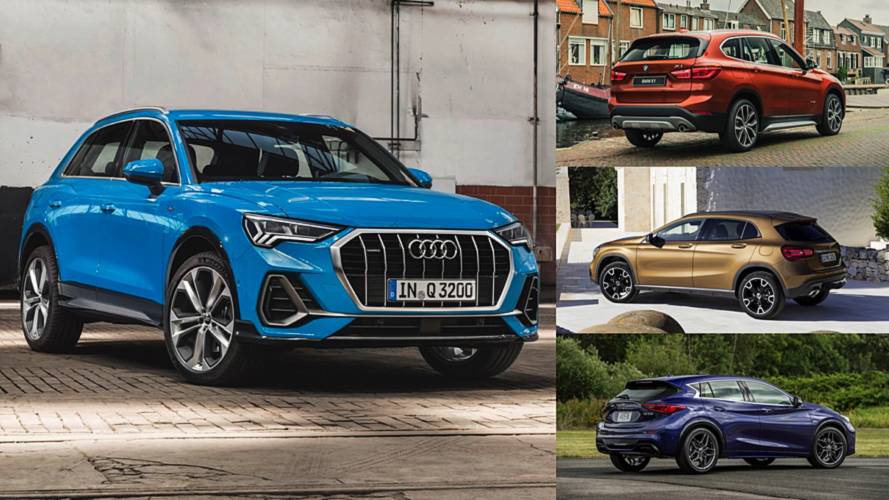 The Audi Q3 is all new – here's how it compares to competitors from BMW and Mercedes-Benz.

At first glance, the new Audi Q3 crossover is a much-improved product over the outgoing model. Its sharper, more stylish, and with a 2.0-liter turbocharged engine and standard Quattro all-wheel drive, it maintains all the same elements that made the previous model a success. But how does the new version stack up against its closest competition?

Its two most direct competitors hail from Germany. The BMW X1 and the Mercedes-Benz GLA will be the two luxury crossovers most buyers compare to the Q3. Though both options have been around for a number of years, they still hold firm against the all-new Audi.

The BMW is the most powerful option out of the box, even though it's technically the oldest nameplate. Its turbocharged 2.0-liter engine produces 228 horsepower (170 kilowatts) and 258 pound-feet (192 kilowatts) of torque, whereas the Q3 produces just 187 hp (139 kW) with a 2.0-liter. Audi offers the least powerful entry-level option (a mid-range 230-hp option will also be available), but it does have one significant selling point the other two don't: all-wheel drive. If you want all-wheel drive on either the BMW or the GLA, you'll have to pay extra.

But, as mentioned, buyers in this segment are no longer related to German options exclusively. Infiniti and Land Rover both build small, competitive crossovers. The QX30 and Range Rover Evoque are solid options, and compared to the Q3, they still hold up (even though the latter is nearing a major update).

But it's not all about power. With an extra 3.8 inches added to the length, the Audi Q3 is one of the most spacious crossovers in the segment. It boasts a hearty 23.8 cubic feet of room behind the second row, and 53.9 cubes with the rear seats folded flat. That's better than nearly every other crossover in this competitive set (only the BMW is better with the rear seats folded flat).

The 2019 Audi A3 hits dealers in Europe this November, while U.S. dealers will see the crossover arrive soon after that. No word on pricing just yet.

More of the Audi Q3: