Downshifts sound like a V8-powered blender switched to rabid.

As Dodge prepared to unleash its Challenger SRT Demon in early 2017, Texas tuner Hennessey Performance unveiled its Kryptonite, The Exorcist – a 1,000-horsepower Camaro ZL1 with unholy amounts of power that bordered on blasphemous. Sprints to 60 miles per hour (97 kilometers per hour) happen in less than three seconds while a quarter-mile drag race flies by in under 10 seconds when you swap the rear tires for drag radials.

The new video from Hennessey Performance provides some biased driving impressions. No company would have its employee denigrating one of its marque products. We don't learn anything new from the video about the car. Instead, we experience a thunderous soundtrack of 1,000 hp pumping from the supercharged 6.2-liter V8 engine. 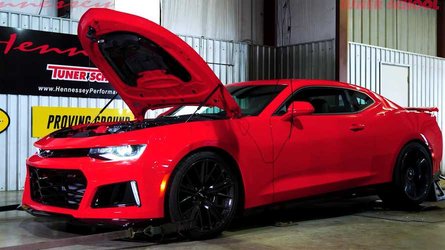 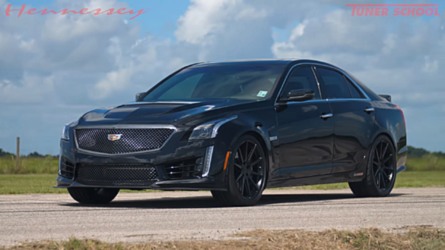 Hennessey upgraded several parts to increase and handle the power, included the supercharger that now delivers 14 psi of boost. The company ported cylinders, added new names, revised the exhaust, and upgraded the intercooler to keep those hellish temperatures down to tolerable. The video shows the Camaro Exorcist putting 959 horsepower to the wheels on the dyno. That's an exaggerated response to the Demon's 840 hp.

You see little of the car's exterior. However, there is picture-in-picture showing the instrument cluster as the driver clashes through the gears of the 10-speed automatic transmission. Watch as the digital numbers jump as the car accelerates.

As exciting as it is to watch a 1,000-hp Camaro, the joy derives from the blistering soundtrack. The Camaro Exorcists is nauseating. Listen to the supercharger gulping air as it angrily spits it out the rear. The downshifts are the snaps and snarls of a dog auditioning for a Cujo remake.

Watch the video not to learn, but enjoy. The sensory pleasure is worth two minutes of your day. You won't sign up for ministry, but you may remortgage the house to buy a Camaro Exorcist.