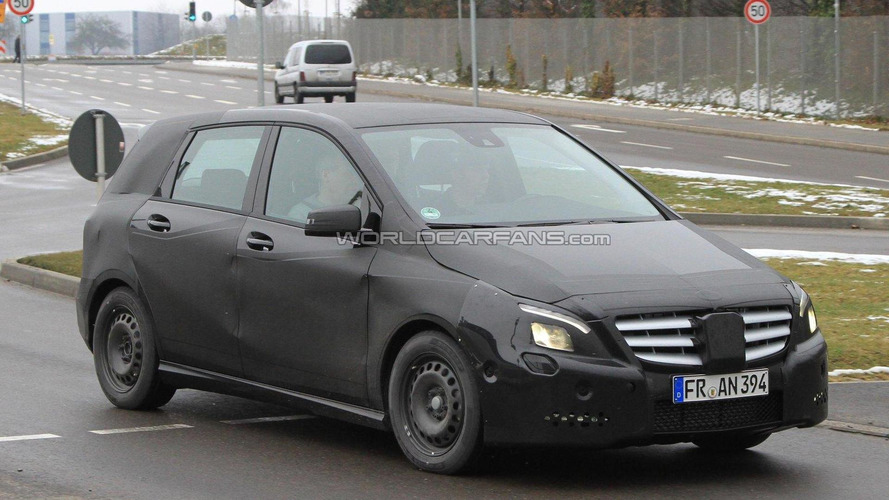 New details reveal more of the next B-Class than previously seen. The next-generation B-Class will come in several body styles including a sedan, coupe and crossover variant.

Here's the latest set of spy shots of the upcoming 2012 Mercedes-Benz B-Class.

The shots published here are now showing more of the front and rear light clusters than we've previously seen and spotted above the headlights is an LED strip similar to the new 2012 SLK. We can also see that new design line from the BlueZERO concept along the side of the car and the front nose also looks more upright, consistent with Mercedes' current language.

Another noticeable detail is how the roof slopes downward at the back end of the car making the next B-Class look less MPV bulky and more like a 'raised' hatch à la Golf Plus.

Reports are that the next B-Class will come in several body styles including a sedan, coupe and crossover aside from its standard five-door hatch variant.

The next-generation B-Class will be sourcing its smaller power plants from Renault and those will include 1.2 liter, 1.4 liter and 1.8 liter turbocharged petrol engines as well as a 1.6 liter diesel. Mercedes-Benz will supply the B-Class's larger engines including a range-topping 2.2 liter diesel.

The next B-Class will also come as a plug-in hybrid (E-Cell Plus) as well as with an all-electric (E-Cell) and a fuel cell (F-Cell) variant.

Gearboxs on offer will be either a six-speed manual or six-speed dual clutch (Mercedes-Benz will drop the CVT) and the next B-Class will also feature a stop/start system.