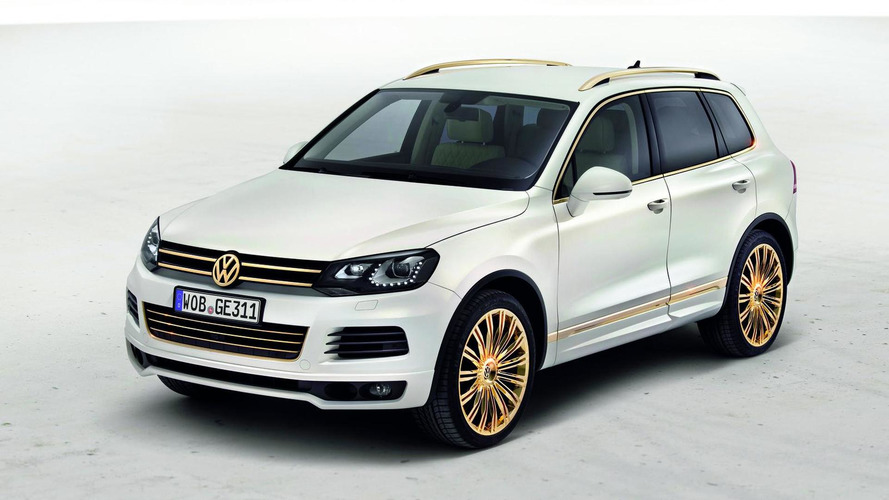 Volkswagen is making a splash in the desert state of Qatar with three debuts. Following yesterday's Formula XL1 concept reveal at the Qatar Motor Show, Veedub has announced two more concept studies based on the Touareg SUV.

Volkswagen is making a splash in the desert state of Qatar with three debuts.  Following yesterday's Formula XL1 concept reveal at the Qatar Motor Show, Veedub has announced two more concept studies based on the Touareg SUV.

The first study transforms the manic Race Touareg 3 Dakar rally vehicle into a docile street legal SUV. On the outside the Race Touareg 3 Qatar is painted "Magic Morning" metallic white with gold flakes in addition to Race Touareg graphics along the sides. The SUV also swaps its 16-inch wheels for gold painted 18-inch BBS wheels.

In an attempt to achieve a "stealth look" the interior was completely redesigned. It's equipped with Recaro race seats upholstered in Nubuk and perforated Nappa leather.  Also trimmed in Nubuk are the door trim panels plus other trim elements scattered about in Matt Carbon.  The roll cage has been painted "Serpentino Grey Metallic". Lastly, tribute is paid to the Dakar Rally where all victories are etched in the anodized aluminum of the center console, right next to the "Race Touareg" signature. With the added weight, the 310 PS (228 kW / 306 bhp) Race Touareg still manages the sprint to 100 km/h (62 mph) in under 6 seconds.

The second study appeals to the lavish side of the region with the Touareg Gold Edition. As the name suggests, the SUV incorporates 24-carat gold finishing on the custom designed 22-inch wheels, roof rails, protective guard strips and window frames, mirror caps and parts of the air intake frame, "Touareg V8" nameplate and boot sill trim. Like the Race Touareg the Gold Edition is also painted in "Magic Morning" body color.

On the inside, 24-carat gold also adorns many of the car's accents and switches while the roof receives an Alcantara headliner and the seats are covered in Nappa leather plus ornamental stitching. The dashboard is trimmed in a natural brown leather; contrasting seams in "Magnolia" color. Walnut Burr accents are found in the center console and door trim panels with genuine gold marquetry.

Despite requiring it's own security team when out on the town, VW believes this is one of the most sophisticated SUVs in the world.