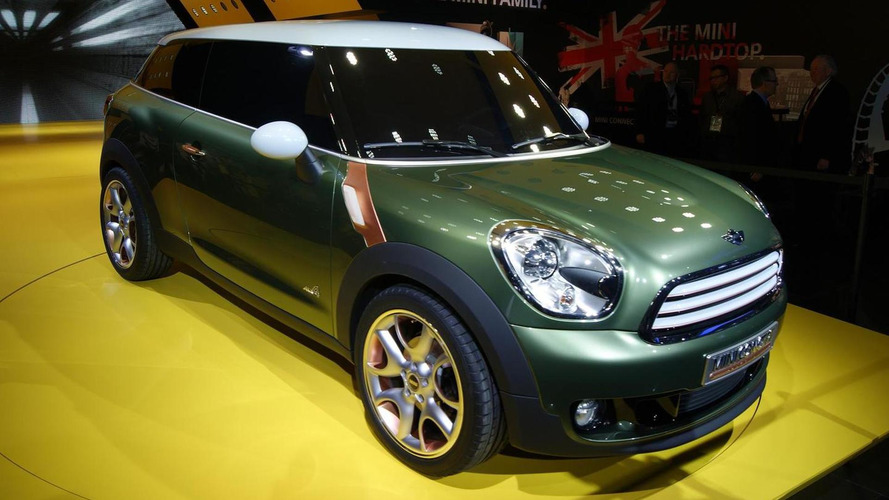 What would a coupe version of the MINI Countryman look like? MINI's latest concept gives us an idea. The story and live pics inside.

During the 2001 North American International Auto Show, the BMW-led redo of the MINI Cooper was shown off for the first time in the U.S. The car's quirky look was quickly popular with American audiences, despite their penchant for larger vehicles.

Now ten years later, the BMW Group is introducing a new concept at the show, the MINI Paceman. The crossover will attempt to excite NAIAS crowds, particularly "young, modern, extrovert urbanites" that the company believes is ahead of the pack.

The vehicle is basically a two-door Countryman All4 with a tapered roofline and 19-inch wheels.  Behind the new front fascia, and under the flattened bonnet, comes the JCW 1.6-liter turbocharged four-cylinder engine.  It cranks out 155 kW (208 hp / 211 PS) and up to 260 Nm (192 ft-lb) of torque. Those looking for a little extra power will be pleased with the Overboost function, that briefly increases maximum torque to 280 Nm (207 ft-lb).

Fitted with a new version of the trim, a full leather interior and the Countryman's center rail expect the car to turn at least a few heads. Should the crossover be wildly popular at NAIAS, the company says the Paceman could wind up in MINI's product lineup.