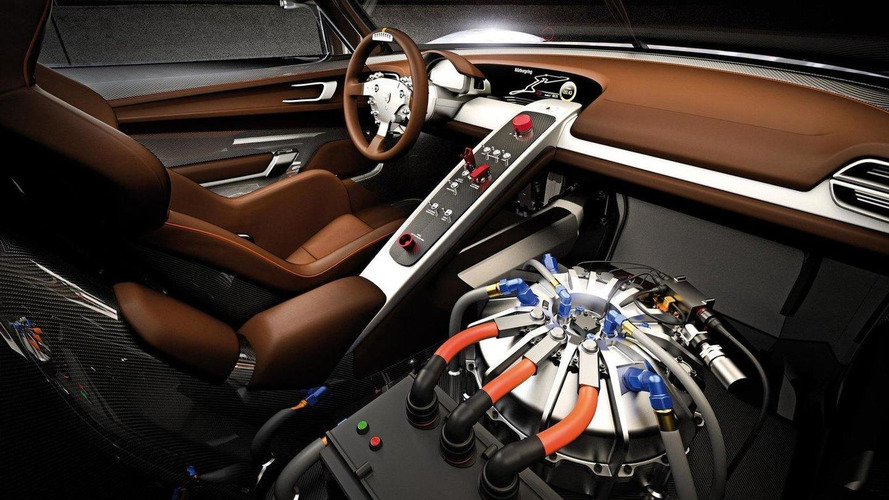 Porsche touts the much anticipated model as perfect marriage between the technology of the 911 GT3 R Hybrid and the design of the 918 Spyder.

Porsche has unveiled the 918 RSR Coupe at the Detroit auto show today.

Porsche is touting the much anticipated model as perfect marriage between the technology of the 911 GT3 R Hybrid and the design of the 918 Spyder. The 918 RSR Coupe is a Le Mans racer that uses a KERS system (kinetic energy recovery system) developed by the Williams F1 racing team. The hybrid setup includes a flywheel generator positioned at the driver's side instead of a passenger seat whose rotor spins at up to 36,000 rpm and can store energy. Two 75 kW (150 kW total) electric motors are mounted on each of the front wheels. The motors can both power the front axle as well go into reverse during braking to act as generators for the flywheel which can then send that power back to the front wheels for bursts of spot acceleration.

Porsche has also fitted the 918 RSR Coupe's front axle with a torque vectoring system with variable torque distribution to optimize the power going through the front wheels.

The 918 RS Coupe comes with a 6-speed constant-mesh transmission with longitudinally-mounted shafts and straight-toothed spur gears.

On the outside, the car is dressed in a "liquid metal chrome blue" paint and features large wheel arches and air intakes and a fan wheel between the ram air intake tubes and rear spoiler.

On the interior it's the same form-follows-function design. There's a bucket seat in brown leather for the driver, the gear number flashes on the steering wheel while other displays provide relevant information. There's also a modest center console with rocker switches.