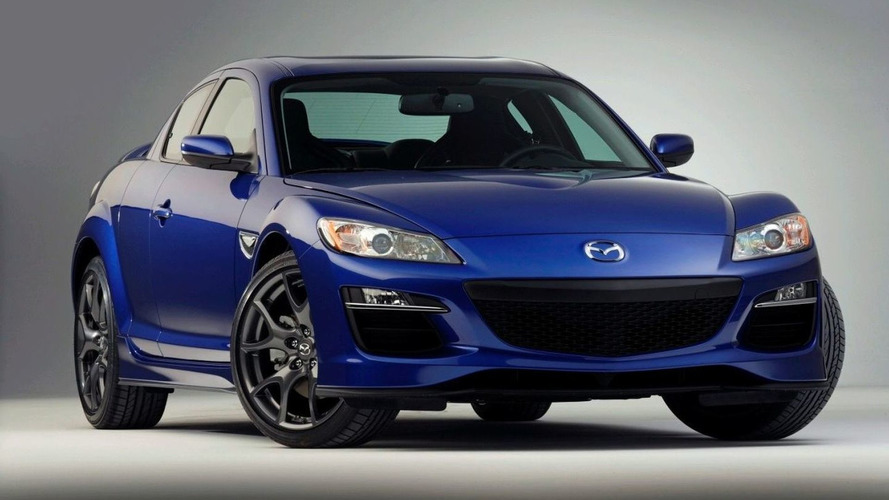 Mazda are to unveil their 2009 model year RX-8 tomorrow at the Detroit Show. The revised RX-8 has undergone technical improvements to both handling and acceleration, in addition to the restyled exterior, uprated premium quality materials and higher spec.

Mazda are to unveil their 2009 model year RX-8 tomorrow at Detroit's North American International Automobile Show. But there's more to this facelift than meets the eye, the revised RX-8 having undergone technical improvements to both handling and acceleration, in addition to the restyled exterior, uprated premium quality materials and new standard equipment now featured. It will star alongside a fellow world debut vehicle, a concept by the name of 'Furai', and the Mazda Taiki concept which makes its North American debut at the show.

Spiritual successor to the Cosmo of 1967, featuring in its line-up the world's first production rotary-engined car, the new Mazda RX-8 has won numerous awards and sold near to 167,000 units since its inception in 2003. Unsurprisingly, the rotary motor remains, although performance is upped and given an optional complementing R3 sports package, re-working the RX-8's design inside and out. The 2009 model is available in 232 hp or 212 hp guise, the former with a six-speed manual and the latter with a semi-automatic six-speed with paddle shift.

A design of 'athletic sculpture', new modifications aim to retain this theme while freshening it for the 2009 model year. Enhancements include the restyling of front bumpers and fascia, rear bumpers, front and rear lamps and larger exhaust pipes, with alloys now available in a five-spoke 'rotary-reminiscent' design. The centre console is redesigned for a broader posture, a new steering wheel and new seats front and rear added for further refinement. But the cabin was of particular interest to engineers looking at the RX-8's ergnomics. Seats have been developed to offer good levels of support, improving posture which is proven to thus reduce fatigue. The instrument cluster is also backlit in a colour that aids reducing eye fatigue and strain.

RX-8 R3. Its designation may be awkward, but the kit certainly isn't. Drawing on the RX-7's R1 and R2 packages, the new-generation R3 kit offers 2009 RX-8 customers the option of adding sport-tuned suspension and a host of visual and technological enhancements. At the front, a sporty front spoiler and fog lights are added, while a rear spoiler, 19-inch alloy wheels and side sills are further sporting additions. In the cabin, Recaro sports seats in the front head up the sporting gear, while accompanying technology incudes a 300-watt Bose audio system with surround sound and noise compensation. Bluetooth hands-free, keyless entry and start system also come included.