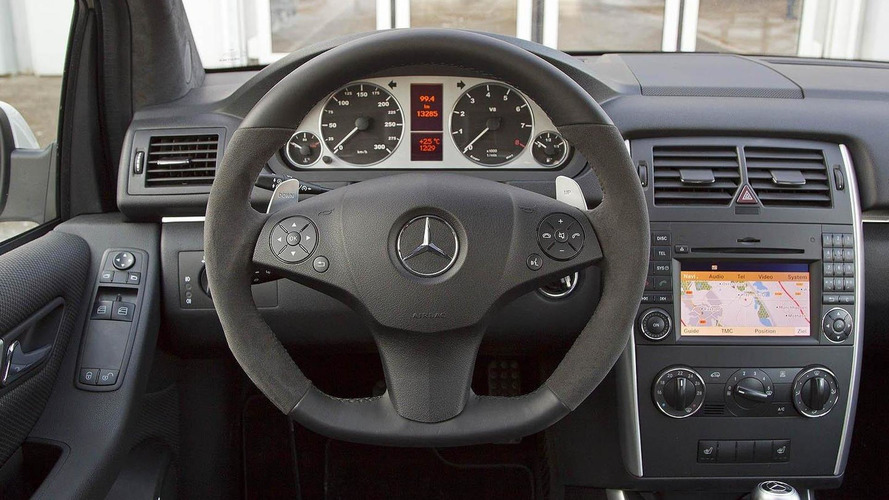 Team of student engineers developed the B55 at Mercedes-Benz's Rastatt facility in Germany.

Well, this one-of-a-kind B55 seems pretty close to achieving that already.

More details have now emerged on the birth of the B55, which we reported on earlier this month.

The idea for the project came from Peter Wesp, plant manager at Mercedes-Benz's Rastatt facility. Wesp then enlisted colleague Andreas Würz, a technical vocation foreman, who took to measuring the engine bay of the B-Class and figured it could fit a V8.

A team of 12 second- and third-year trainees was then assembled, with specialisations in production mechanics and "automotive mechatronics".

"The V8 power unit fitted amazingly well, and we were even able to use the original engine mounts," said Würz.

A rear axle from a W 210 series E-Class was also a fairly easy fit to convert the B-Class into a rear-wheel drive. A K&W coil-over suspension was also added.

Other replacement parts were lifted right from the Mercedes-Benz catalog, including a collection of parts to create the sport exhaust system (creating that sound you hear on the video) and other AMG performance parts such as the ventilated disk brakes from the C32 AMG.

The objective was to make the B55 as close to a road-ready production B-Class as possible and that also involved an interior finish worthy of the engineering of the car. The roof and pillars were lined with Alcantara and the seats were finished in a leather/Alcantara combination.

"The team of trainees has done a superb job, and placed a spotlight on the sporty genes of the B-Class that nobody could have imagined," said Wesp.