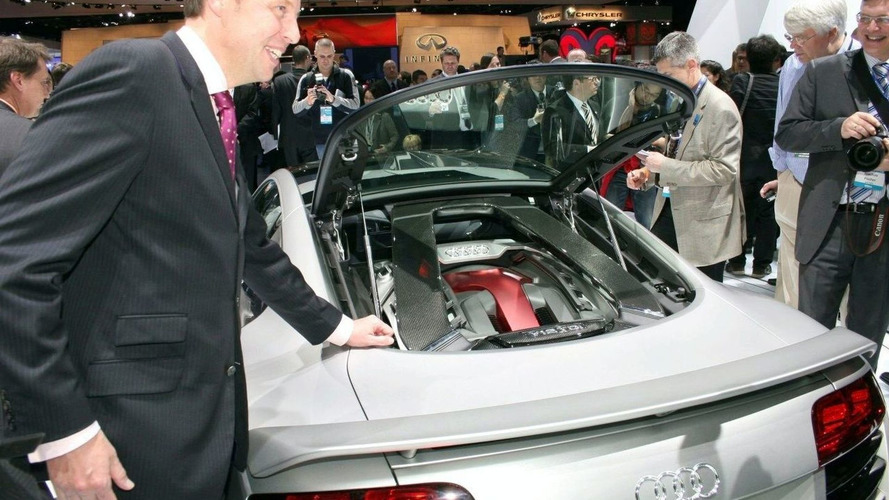 Audi is presenting a revolution in the top class at the Detroit Auto Show 2008 Ã¢â‚¬â€œ the first 12-cylinder diesel engine in a high-performance roadgoing sports car.

Gobsmacked. Flabbergasted. Utterly speechless. When the sheets were pulled off of the Audi R8 V12 TDI - Audi's latest study model, the sound of jaws hitting the floor was impressive. About as impressive as the gasoline powered Audi R8 is in real life, we can only imagine what the diesel TDI version can do when it is let loose on the roads. After all, the R10 diesel race car is about as succesful as the R8 is.

The Audi R8 is of course a major success for the four-ringed brand from Germany. R8's are sold out for the remainder of the year and this 500 hp / 1,000 Nm torque Grace Silver monster is sure to be picked up as fast as Audi can make them should the German Manufacturer decide to proceed with production,  but the entire WCF crew is united on this topic, please Audi, don't make us go without!

The keener Audi fans will have spotted the RS rhombus-pattern in the air inlet covers, the sideblades are much wider in the bottom third and the NACA duct in the roof which accelerates the air drawn into the engine compartment. The R8 V12 TDI looks wider than its gasoline sibling and shows its core off with pride, the engine is covered by the restyled rear glass lid and is illuminated at night by LED's. Another little extra are the LED rear lights with 3D look and the full-LED headlamps.

The Audi R8 V12 TDI is a piece of art and seems too precious to use, but begs to be driven hard. The WCF newsroom has picked its Car Of The Year for 2008. Read on for further details.