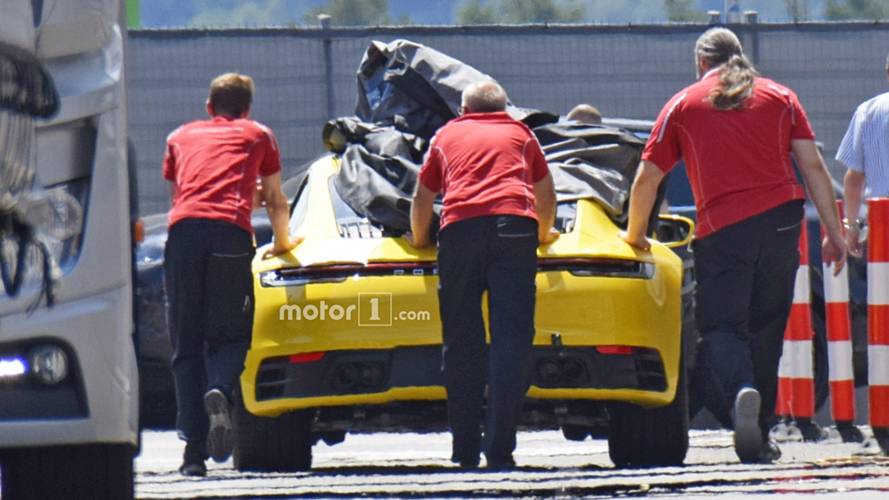 It's the Nine Eleven we're all familiar with, but a little bit more modern to keep up with the times.

Back In February, an image of a very yellow Porsche 911 (992) made the Internet rounds to reveal its completely exposed rear end. Fast forward to today, a similar prototype has been caught on camera by our agile spies to show more of coupe’s sleek derrière. Just like before, there’s no camouflage on the test vehicle, with only the car cover and three Porsche employees getting in the way.

It’s a good opportunity to see the full-width taillights similar to those of the outgoing 911 Carrera 4S, but the clusters are considerably slimmer than even those of the latest Panamera and Cayenne. Judging by the quad exhaust system, which by the way looks a bit unfinished, we could be dealing with the aforementioned Carrera 4S. That being said, you can never be too sure when dealing with prototypes since in many cases automakers use parts from various types of models.

Compared the car spotted a few months ago which had the centrally positioned “Porsche” rear lettering in all-black, this one had a more visible silver finish. Not that many people will care about, but the 992 seen here lacks the rear parking sensors of the previous prototype.

As you may recall, Porsche has already previewed its next iteration of the Nine Eleven and it is believed the peeps from Stuttgart will introduce the first versions of the 992 as early as this fall, probably after unveiling the production-ready Speedster special edition based on the 991.2. Beyond the usual versions you’d come to expect, the already vast lineup will be expanded furthermore to include a couple of plug-in hybrid derivatives. As for a fully electric 911, it’s not going to happen anytime soon.

The Paris Motor Show scheduled for October will allegedly be the venue where Porsche is going to take the wraps off the 992-based Carrera 2S and 4S, with many other versions to follow in the years to come.