The E-turbo can sacrifice its efficiency to make a better sound.

One of the defining features of Ferrari's vehicles is the way that they sound. Whether there are eight, ten, or twelve cylinders thumping under the hood, the Prancing Horse's engines need to make a noise that immediately grabs attention. A new patent from Ferrari shows how this beautiful music could exist in the future by imagining an electric turbocharger that can adjust to create a more exciting sound during sporty driving.

The general layout in the patent is the same as most other electrically-operated turbochargers. Exhaust gases spin a turbine, which operates an electric generator. A battery stores this energy and uses it to spin a compressor on the intake side of the engine. Since the sections are mechanically independent the turbo can be spinning to generate power without operating the compressor or vice versa.

Get The Full Scoop On Ferrari's Future: 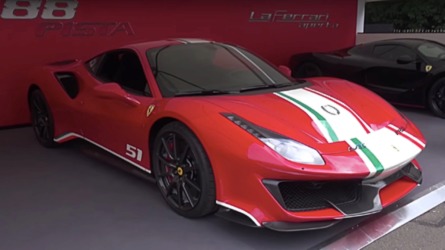 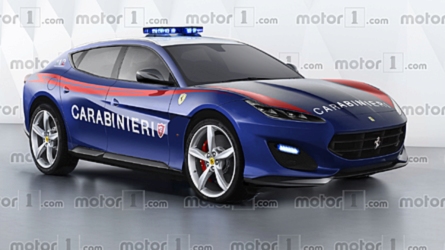 Ferrari's patent adds an extra feature to this system. A microphone in the cabin would monitor the sound in the passenger compartment. An electronic control unit would decide the optimal noise in the cabin and modify the electric turbo to produce the appropriate roar for occupants to hear. Depending on the driving conditions, this might actually make the electric turbo less operationally efficient but come with the advantage of creating a more attractive sound.

Ferrari believes this system comes with multiple advantages. For example, it would be possible to implement this tech just with software, which means there's no mechanical modification necessary to the electric turbo. The setup is also highly variable, so the amount of sound could change depending on driving mode or other variables. This adjustability also means there isn't a "relevant negative effect on the overall energy efficiency," according to the patent description.

While Ferrari's patent shows this system on a four-cylinder engine, there's nothing specifically limiting it to this type of powerplant. The layout could work just as well on a V8 or another cylinder layout.