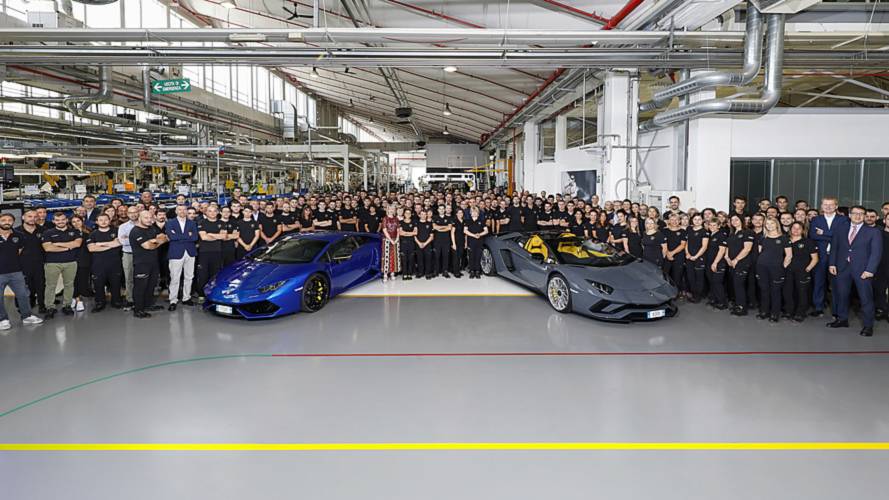 Production isn't over yet, so the total assembly numbers for these supercars are only going to grow.

Lamborghini has set major production milestones for two of its models by building the 8,000th Aventador – specifically an Aventador S Roadster in Grigio Telesto gray for a customer in Japan. In addition, the Italian firm built its 11,000th Huracán, and the example in Blue Nethuns is for a buyer in Italy.

With 8,000 Aventadors now on the road, the model's production has nearly doubled its predecessor, the Murcielago. Lambo ended production of that machine on May 11, 2010, after 4,099 of them left the factory.

Conversely, the Huracán still hasn't matched the volume of its predecessor, the Gallardo. The Italian brand managed to turn out 14,022 of them when assembly ended in November 2013. At that time, Gallardos represented nearly half of Lambo's output since the firm started in 1963.

Lamborghini continues to grow with global deliveries of 2,327 vehicles in the first half of 2018 – up 11 percent year over year. Of those, 1,604 of the vehicles were Huracáns, and 673 were Aventadors. The remaining 50 units were almost certainly Lambo's new Urus SUV.

New Lamborghini supercars are on the way. The company confirms that the Aventador successor is under development. Details about it are still fairly scant, but the unnamed model's engine is a V12 with hybrid assistance. Before the model's arrival, Lambo's upcoming hypercar with a design taking cues from the Terzo Millennio concept should provide a better preview of what to expect from the automaker's future. Spy shots also suggest an Aventador Superveloce Jota could be the ultimate farewell variant to the strong-selling model.

A Huracán appears farther away from a replacement, but Lambo already has some ideas about it. Power would still come from a V10 but possibly with hybrid assistance. The company would offer separate rear- and all-wheel-drive variants because combing both systems into one vehicle like on the latest BMW M5 and Mercedes-AMG E63 S comes with too much of a weight penalty for a supercar.

Sant’Agata Bolognese, July 17 2018 – Seven years after its market introduction, the Lamborghini Aventador achieves an important milestone in its history with 8,000 units produced. Chassis number 8,000 is an Aventador S Roadster: the model in Grigio Telesto will be delivered to a customer in Japan.

After just four years of production Huracán number 11,000 rolled off the assembly line. The Blue Nethuns car, chassis number 11,000, is destined for the Italian market.

Automobili Lamborghini’s worldwide deliveries increased by 11% to 2,327 cars in the first half of 2018. Global sales of the Huracán model line with coupé and Spyder as well as racecar versions, showed an increase from 1,400 to 1,604 units. The Aventador line maintained the high level of the previous period with 673 units delivered.