Porsche 911 GT3 Cabrio Spied On The Streets Without Any Disguise 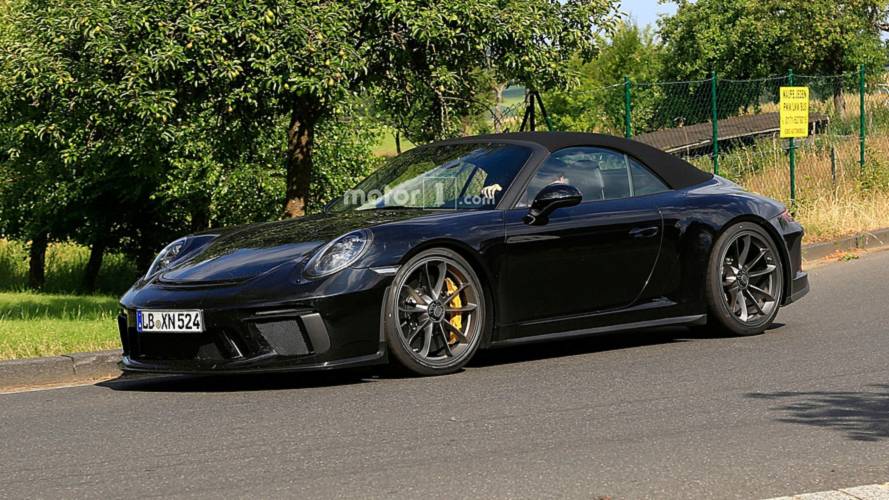 It appears Porsche will offer this car in addition to the Speedster.

A couple months ago we spied a very similar looking Porsche to the one featured here. At first glance (and possibly a second and third) you might be tempted to say this is a prototype of the 911 Speedster, which we’ve seen in earlier spy photos and most recently as a one-off concept going up the hill at the 2018 Goodwood Festival of Speed. Unless Porsche is going to some added lengths to confuse us, however, this is not a Speedster but in fact a straight-up 911 GT3 Cabrio.

For starters, the hood is different. This car (pictured on the left) clearly wears the flat cover from the standard GT3 versus the minor sculpting we’ve seen on Speedster prototypes (pictured on the right). The dead giveaway comes from around back, where we see a neat-fitting roof mated to a conventional decklid. The Speedster of course has a completely different rear cover to give it that iconic Speedster look.

Being a GT3, the Cabrio should have the same 4.0-liter flat-six making 500 horsepower (373 kilowatts) going exclusively to the rear wheels. The big wing is obviously missing, which we suspect is replaced by an active spoiler like what we’ve seen on the Speedster. That would certainly make for a more attractive top-down touring machine at slower speeds, while still offering some much needed downforce should that power be exercised. There’s always a possibility, however, that mechanical tweaks could be in the works. After all, this should be the absolute last hurrah for the current-generation 911.

Of course, we know a Speedster is coming, but does this latest batch of spy shots mean it will coexist with a GT3 Cabrio? It sure seems that way, and it would certainly make for a fitting swan song to the 991-Series Porsche before the next-generation enters the scene later this year. Considering this car is running around with no camouflage, we expect to hear something official on this model very soon.