... following a failed attempt earlier in the day.

At the 2011 Goodwood Festival of Speed, Terry Grant took down the record for the fastest one mile covered with a car on two wheels with a time of 2 minutes and 55 seconds. He returned in 2015 with a Nissan Juke Nismo RS to improve the record by a whopping 45 seconds to just 2:10. Last weekend, the skilled stuntman was at the festival yet again with a Range Rover Sport SVR like the one he used last year.

After a mishap (see video at the bottom) during his first lap, Grant got back into the performance SUV to have another go at successfully completing the hill climb using only half of the Range Rover Sport’s wheels. He covered the lap in 2 minutes and 24.5 seconds, which although is not on a par with the Juke Nismo RS run from three years ago, it still makes for an interesting video definitely worth watching. In fact, this is now officially considered as being the new Guinness World Record for the fastest mile completed by a car on two wheels. 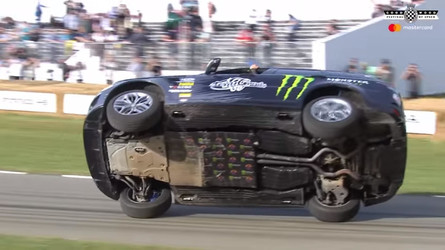 You can easily see in the driver’s eyes the level of concentration throughout the lap as even the smallest mistake would have ended the two-wheeled attempt. Using an SUV that weighs well above two tons makes the attempt even more difficult, but if there’s one man that can do it, it’s definitely Terry Grant. His curriculum vitae includes records for the highest number of donuts in 100 seconds, fastest time for doing one mile in reverse, tightest gap driven through on two wheels, fastest time for changing a wheel on a spinning car, and the narrowest J-turn in a car. And we’re barely scratching the surface here.

Taking the supercharged SUV up the hill on just two wheels while navigating through pretty narrow left and right turns takes a lot of skill and we’re glad the Goodwood Festival of Speed serves as the venue for such attempts almost every year.