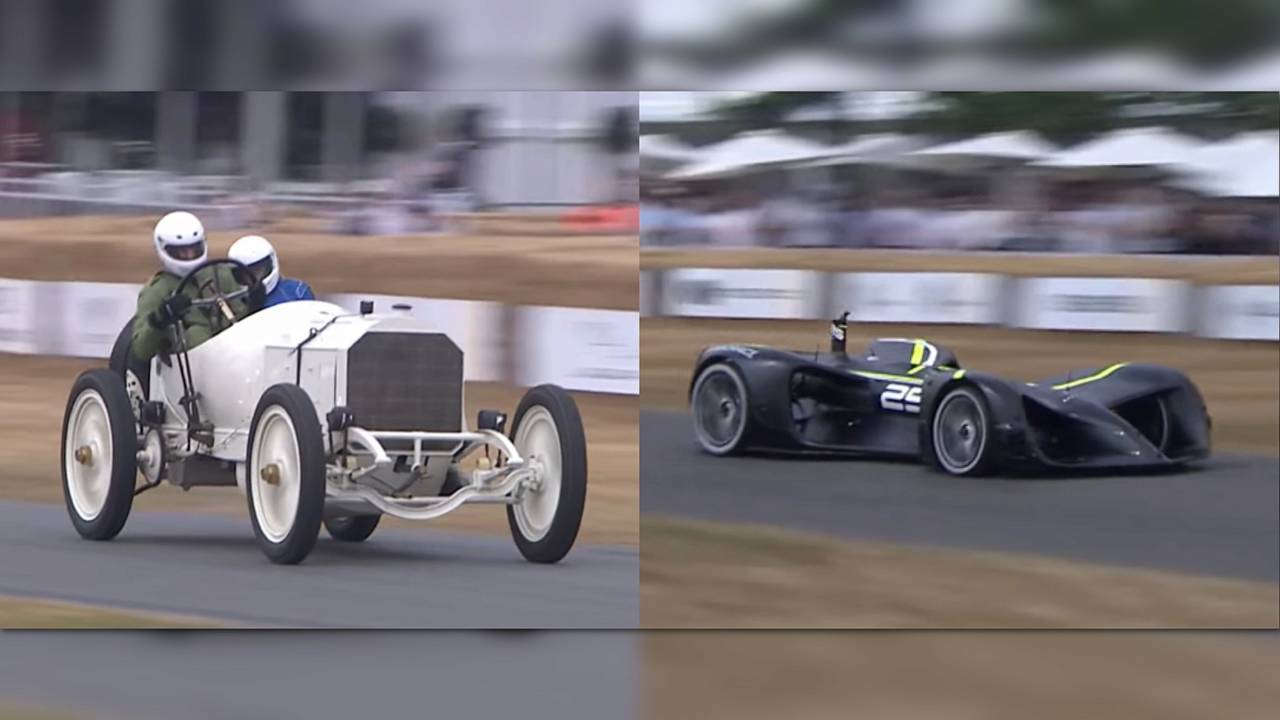 Watch the two cars take on the Goodwood course side-by-side.

From modern cars to classics, the legendary Goodwood hill climb is all inclusive. Thus far we’ve seen the new Toyota Supra prototype, a V8-powered Aston Martin Cygnet, a (sort of) autonomous 1964 Mustang, and a ton of others. But the two cars pictured here, separated by nearly 110 years of history, are arguably the most entertaining duo we've seen thus far.

On the left is a 1908 Mercedes Grand Prix, complete with a driver and passenger, an exterior-mounted shifter, super skinny wheels (with three spares on the back for good measure), and an engine good for probably about 120 horsepower (89 kilowatts). On the right is something far more modern; the Roborace car is fully electric, fully autonomous, and produces more than 720 hp (536 kW) thanks to an electric motor at each wheel. It also sounds like a spaceship relative to the old school Mercedes.

Watching the two vehicles side by side, separated by more than a decade, is an amazing juxtaposition. Click play at the same time on each of these videos to see the two cars in motion together:

Funny thing is, both cars finish at nearly the same time. The 120-hp Merc, driven by Ben Collings, clocks in at one minute 33 seconds – and it looks like it is absolutely hustling up the hill. Though the Roborace car doesn’t have an official time listed, it appears to be just a bit quicker than the Mercedes in this run. The Roborace team says it will make another run of the hill this weekend in hopes of an autonomous record run. With more than 720 horses on tap, we expect it to be much quicker.

There are still a lot of hill climbs to go, though. Stay tuned in to our live video stream of the Goodwood Festival of Speed to watch them all.

See Bill Goldberg's NASCAR And A Lister-Jaguar Crash At Goodwood
⠀

Drunk Autonomous Mustang Takes A Roll In The Hay At Goodwood
⠀