After about 21 years, Toyota is finally replacing the Century with a third-generation model keeping the classic and classy look while bringing the underpinnings up to date. Like the two models before it, the special sedan is only available in Japan and the company’s plan is to sell 50 of these each month. A new video shot in Tokyo at the Mega Web Toyota City Showcase allows us to get up close and personal with the Rolls-Royce of Toyotas finished in Eternal Black.

The chauffer-driven sedan combines a timeless exterior design with a unique interior featuring wool not just on the seats, but also on the door panels as well as on the B-pillars. There are glossy wood accents here and there, along with some rather interesting door handles and a 20-speaker sound system. With an active noise control system, electronically controlled adaptive air suspension, and a lot of sound-deadening material, the new Century is without a shadow of a doubt the most luxurious Toyota ever, complete with electrically operated side and rear curtains for utmost privacy. 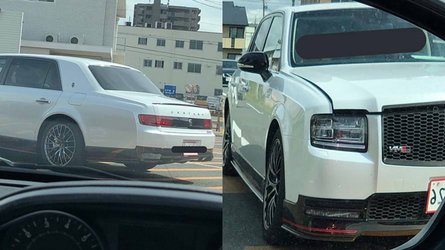 But all of these come at a price, with Toyota asking the equivalent of almost $180,000 for its crown jewel of the JDM range. To put that number into perspective, it’s more expensive than the latest Mercedes-Maybach S560 available in the United States from $168,600. The fullsize Century might be pricey, but even so Toyota is completely booked for the rest of the year and you won’t be able to get one until 2019.

Compared to its V12-powered predecessor, the new one has downsized to a hybridized V8 with a lot more power (425 hp vs. 276 hp) and should be significantly more efficient thanks to electrification.

As a final note, the Century is not the only luxed-up sedan Toyota is selling exclusive in the Land of the Rising Sun as the fancy Crown is also a JDM affair. This one too has switched to a new generation (the fifteenth!) for 2018 and went on sale last month.