The 911 GT2 RS is the quickest road-legal Porsche a customer can buy, but it's no match for the 919 Evo.

The Porsche 919 Evo recently set a new lap record around the Nürburgring Nordschleife by circling the famous course in just 5:19 – shattering the previous record of 6:11.13. Now, there's an opportunity to see just how fast that time is thanks to a video that puts the 919's lap next to Porsche's official clip of the 911 GT2 RS completing the course in 6:47.3. 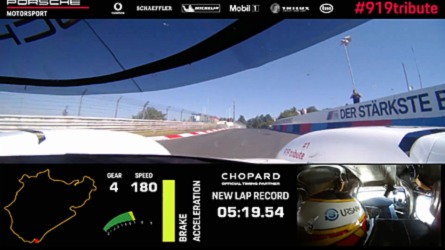 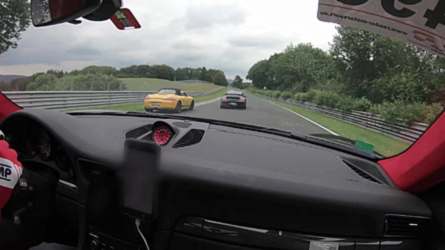 The differences are evident from the very start of the clip. Within seconds, the 919 Evo uses its combination of a 2.0-liter turbocharged V4 and two energy recovery systems to rocket down the track. The speeds aren't even on the same level. On straight portions of the track where the GT2 RS can't quite reach 186 miles per hour (300 kilometers per hour), the 919 is doing over 205 mph (330 kph).

The 919 can also corner faster. Timo Bernhard is able to glide through the turns, and carrying more speed in the bends lets his race car gain an even larger lead. As a comparison of the huge difference in performance, the 919 ends its lap, and the GT2 RS is still nowhere near the Nordschleife's long final straight. According to Porsche's telemetry, the 919 had an average speed of 145.3 mph (233.8 kph), in comparison to 114.4 mph (184.11 kph) for the GT2 RS.

Porsche created the 919 Evo specifically to set lap records by taking the race car and stripping away anything unnecessary for short runs on the track. In the process, the engineers removed things like the air conditioning, windshield wiper. The development team also fitted revised bodywork.

The GT2 RS still needs to work on the road, though. It retains amenities like an infotainment system and room for two occupants. Alcantara upholstery offers comfort with a sporty aesthetic. There's even an optional Bose surround sound system for buyers that want to enjoy music in addition to the sound of the biturbo flat six.