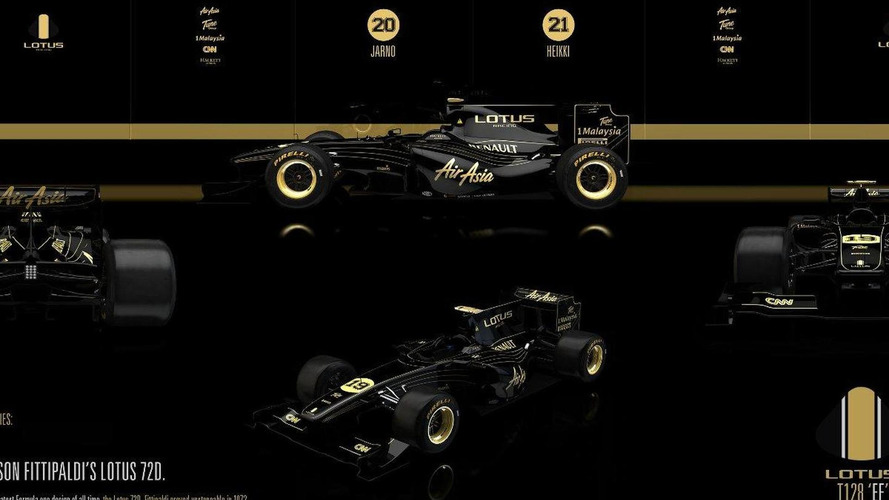 Team Lotus looks likely to ditch its plans for a black and gold livery in 2011 following confirmation of Group Lotus' collaboration with the separate Renault outfit.

Team Lotus looks likely to ditch its plans for a black and gold livery in 2011 following confirmation of Group Lotus' collaboration with the separate Renault outfit.

Weeks ago, as the Lotus name dispute was developing amid rumours Group Lotus was eyeing a separate F1 foray, Tony Fernandes' team announced it would abandon its green and yellow livery of 2010.

Lotus' iconic green and yellow has been deployed by Group Lotus in other racing series this year including Indycar, so Team Lotus said it had decided to go a different route for 2011.

"I know the return to the track of the legendary black and gold will be met with universal support as it strikes such an emotional chord with fans around the world," said chief executive Riad Asmat.

The black and gold was made famous by the JPS-sponsored cars driven by the likes of Ayrton Senna in the 80s.

But when Group Lotus' 'Lotus Renault GP' plans were unveiled on Wednesday, the Enstone based team - also releasing photos of a re-livered R30 car - said its cars will also be black and gold next year.

As the news broke, fans of Fernandes' Team Lotus urged the Malaysian outfit to simply stick with green and yellow.

Mike Gascoyne's secretary duly took a poll, showing 77 per cent support for retaining the current colours, while only 15 per cent want the next car to be black.

"We always had the idea and then it leaked out through the press," he told the Telegraph.

"Three days later they (Team Lotus) were announcing they were doing black and gold.

"At the end of the day, I don't think there will be any confusion as to which cars will be which in terms of position on the track," added Lopez.

Bahar said he doubts all four Lotus cars will be black in 2011, but insisted that if it does happen, he would be "fine with it as it would increase the visibility" of the brand.

"For me, four are better than two," he told BBC Radio Norfolk. "I have nothing against that."

He added that Proton, the Malaysian carmaker that owns Group Lotus, will be handling the legal side of the affair.

Bahar explained that Group Lotus decided to enter F1 with an established team rather than link up with Fernandes' new foray because the former is "much, much more" affordable.

"We believe there is the potential to go back to where they (Renault F1) were when they were winning world championship titles," he explained.