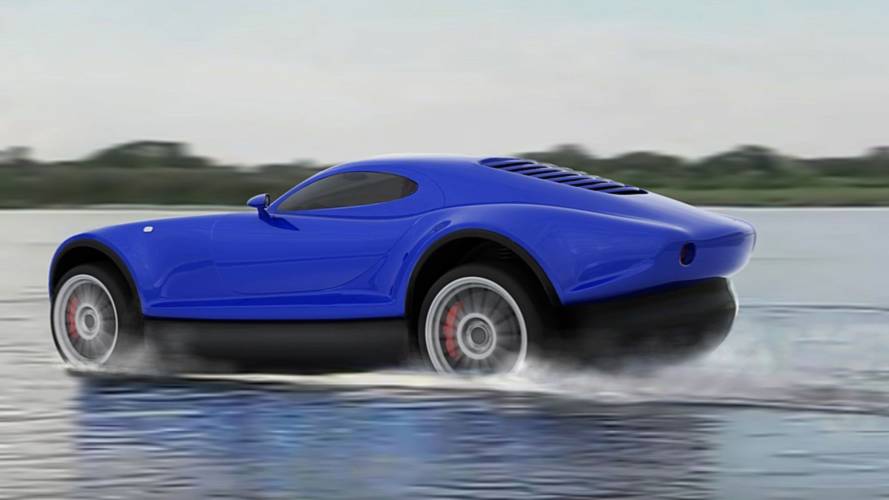 It works as a traditional car, too.

The Russian startup Yagalet has a bizarre, new idea about how to make an amphibious car – turn it into a hovercraft. If a floating sports car isn't odd enough, then Yagalet has some even weirder goals because if the first model is a success, then the firm wants to build similar tech into an SUV, minivan, and for some reason even a house.

The company doesn't provide many specifics about how the hovering system would work. Drivers pull a lever inside the cabin to deploy a flexible skirt around the vehicle. Yagalet doesn't explain how the powertrain then directs air underneath the car to cause it to hover. Once in the air, the firm's sports car could then travel over terrain that normal vehicles can't, like water, thin ice, swamps, and deep snow.

Take A Look At These Similarly Weird Machines:

The company believes that by building a hovercraft it solves a common problem with flying cars because drivers wouldn't need a special license to pilot the model. Yagalet even suggests that owners in cities could use the machine to avoid traffic jams by taking waterways into town.

Yagalet also doesn't yet explain how the driver maneuvers its vehicle but promises to reveal more info later. Since the vehicle is in the air, there needs to be some sort of rudder or way to direct the propulsion, but there's nothing evident on the body to make this possible. Slowing down might be a challenge, too. There's also the question of whether the firm is using separate drivetrains for wheeled and hovering travel or if the company has a clever way of using a single powerplant to drive both systems.

The company doesn't offer any info about when this machine might be available.

Yagalet showed a completely different looking concept (above) for a hovering sports car in 2017. That vehicle was a roadster with a composite body, and power came from an electric motor. The firm didn't provide many other details, though.

Startup Yagalet represents the project of transport of the future - a flying car from Russia.
A consortium of Russian enterprises and specialists led by a designer from Russia in the Samara Region
Vitaly Ivanov is developing a sports car, with the integrated functionality of a hovercraft.
The effect of aerostatic unloading will allow YAGALET® Prototype 2.0 to move with the usual speeds for
road transport over any other surface - the height of the flight is limited by the height of the flexible
shield made of polymeric materials (folding into the lower part of the hull) and the air gap (from the
released air masses formed by the injection unit).
But the most important side of the technology of the hovercraft involves movement over water and thin
ice, viscous swamps and deep snow- which is not available for any other vehicles.
The main advantage of a car with the function of low flight - hovering over the ground. It is a safe
movement which does not require the pilot to have a special piloting skills, therefore, no flight license
will be needed.
An additional advantage of a new type of vehicles is the possibility of using them in the big cities along
waterways and canals - bypassing traffic congestions.
In general, the possibility of using the built-in mechanism that allows movement above any earth
surface, at any time, at the will of the pilot only by pressing a button or moving the lever is an important
advantage in comparison with all other vehicles that require delivery or direct placement in the places
of preferred use.
Perhaps, we are talking about creating a new category of vehicles, and in the future it will be surprising
for everyone that cars once used to go only on wheels. Just recently, experts predicted that crossovers
will occupy a small niche in the production range due to the high cost of acquisition and operation, but
now this is one of the biggest segments of the automotive market, and automakers are systematically
getting rid of compact cars in their model lines.
The startup provides for the development of a model range. It is planned to create a flying SUV, a flying
minivan and even a flying house.
A biggest step in the evolution of vehicles will be adaptation of the screen flight - the flight of wheeled
hovercraft cars at altitudes from one to several meters above the surface, whether it is loaded roads or
water surface. Which is also an advantage, since for the control no flying license and additional
navigation equipment is required.
Technical details of the project, project participants and other details will be presented later. At the
moment, completed the layout design, constructive and layout development.
The idea of the project originated in 2010 and was originally in the concept of a flying motorcycle. Later,
it evolved into a four-wheeled vehicle - a compact open Prototype 1.0. Then, in the course of work to
increase the bearing capacity of the pillow, it turned in to full-size closed (with increasing stiffness and
weight reduction) Prototype 2.0.
The only example of similar development (SVP with the ability to move on wheels on public roads) can
be specified only one project in the world - the Russian experimental flying car GAZ-16 of 1960-64, and
possibly "Object 760" - a flying tank of the same years of development.
The project is conducted at the own expense of the developers and now is ready to consider proposals
for external co-financing