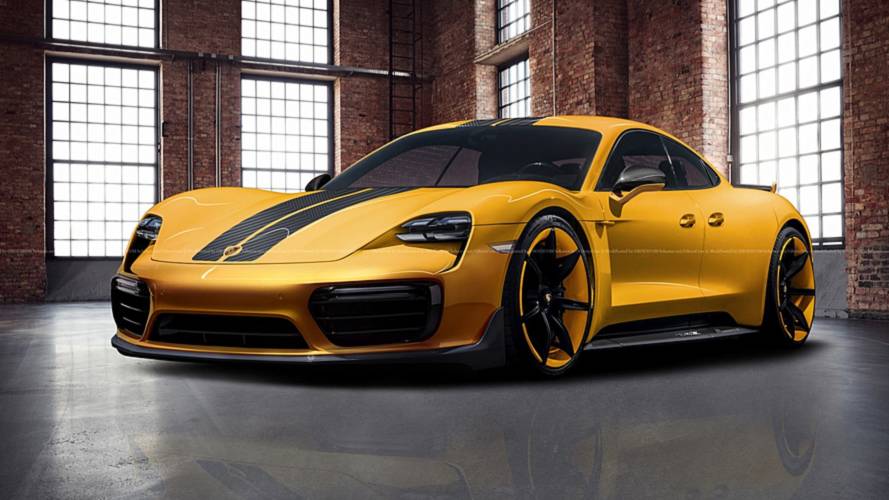 It would be more powerful, too... theoretically.

The Porsche Mission E Taycan is coming. The German marque’s first fully electric vehicle – named after a "lively, young horse," oddly enough – will make its debut sometime in 2019 as a 2020 model year vehicle, and could come with as much as 600 horsepower (447 kilowatts) on tap. Unfortunately, we're still more than a few months away from the EV’s debut – but that doesn’t mean we can’t dream of a more exclusive version.

Rendering artist Aksyonov Nikita has imagined the new Taycan wearing a Porsche Exclusive makeover, complete with a fresh new paint job, unique carbon fiber accents, and a new set of wheels. Its styling is nearly identical to the 911 Turbo S with the same treatment – but there are some unique stylizations to note.

For one, this rendering takes the original Mission E concept and gives it a more production-ready look. The headlights are more pronounced but carry over mostly unchanged. The fascia is unique, too, adopting a tri-grille setup as opposed to the singular grille setup found on the Mission E. There are also side mirrors, something we didn’t see on the original concept.

In the rear, the Taycan gets a more aggressive look. The same singular light bar fixture carries over unchanged from the concept, but now the Taycan makes do with a unique spoiler, a more subtle diffuser design, and dual exhaust tips. We’re not exactly what exhaust tips are doing on an EV, though.

Even though its designer doesn’t dream up any specifications, one would imagine that – similar to its 911 sibling – the Taycan Exclusive would get over more power over the standard variant. The 911 Turbo S Exclusive produces 598 horsepower (445 kilowatts) and 553 pound-feet of torque, giving it the ability to sprint to 60 miles per hour (96 kilometers per hour) in just 2.9 seconds.