The mods don't affect the power but make this an even better tool for lapping the 'Ring.

While there have been plenty of opportunities to see professional racing drivers pilot the Porsche 911 GT2 RS around the Nürburgring, now that the machine is available to wealthy members of the public, the chance has come to see an owner at the wheel. Sebastian Vittel (yes, with an "i") got his turbocharged widowmaker in early May, and he has turned into it into a focused Nürburgring machine since then. Take a ride with him in this clip. 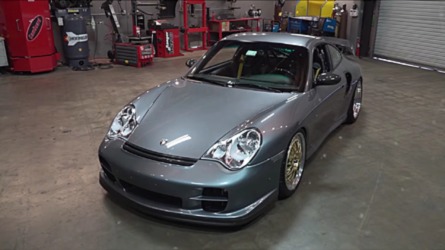 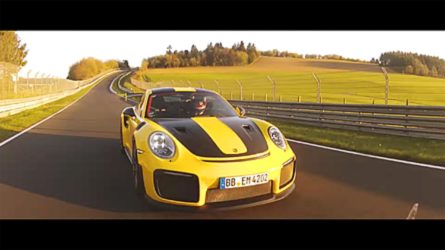 Experience Porsche 911 GT2 RS Onboard Around The 'Ring

Vittel has some tweaks for his GT2 RS so that it performs better around the famous German track. A set of Pirelli Trofeo tires replace the stock Michelin Pilot Sport Cup 2 rubber. Adjustments to the suspensions actually raise the ride height because the stock setup causes the front end to rub at certain sections of the 'Ring. A revised rear wing allows for a greater degree of adjustability, too. Vittel also switched to steel brake discs because they're cheaper to run than the standard carbon-ceramic pieces.

In a brief interview at the beginnings of the clip, Vittel talks a little about the GT2 RS. It's apparently harder drive than his old GT3 RS because he can't push as hard. He describes the difference as with the GT3 RS he could be full throttle all the time, but the GT2 RS requires the driver to lift off the accelerator when entering a corner.

Neither Misha Charoudin nor Vittel mentions the bridge-to-gantry time, and the Vittel timer is blurred in the cabin. However, Charoudin doesn't conceal the display during the interview. It shows 7:20, and that time seems accurate from what's in the video. While significantly slower than Porsche test driver Lars Kern's 6:47.3 'Ring lap in the GT2 RS, keep in mind that Vittel has to deal with traffic and a passenger in the car.