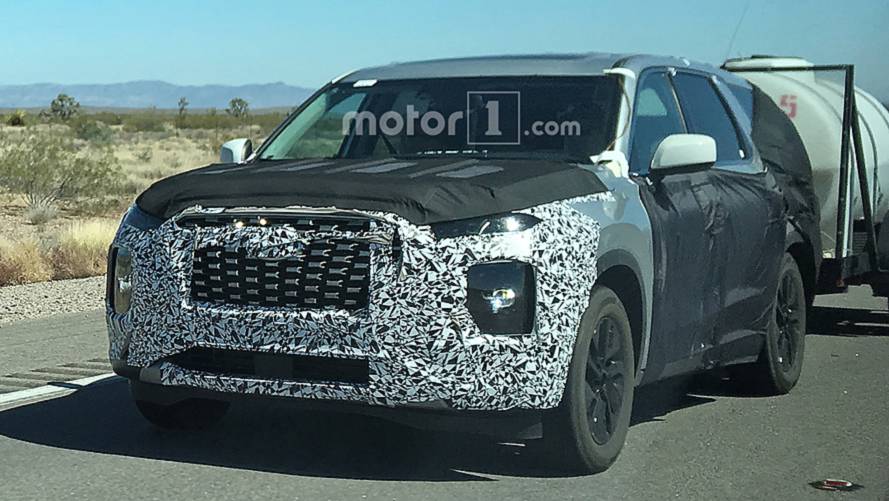 This isn’t the first time we’ve seen the Hyundai Palisade – an eight-seat behemoth of an SUV. Spy photos popped up back in April of the family hauler. Heavy camouflaged covered much of the exterior design. However, new spy photos from Arizona caught the Palisade with its front clip showing, giving us a glimpse of the grille and front fascia design.

What’s new is the lower fascia opening, which we haven’t seen before. You can also spot some design elements on the lower fascia. The headlight units are larger now that we can see more of them, and less of the grille is covered. However, there’s a big circular spot in the upper center hidden where the Hyundai emblem lives. It appears the Palisade borrows from both the 2019 Santa Fe and the Grandmaster concept.

Hyundai is developing the Palisade alongside Kia’s large SUV – the Telluride. You can spot several similarities. The two should be alike when they enter production. Right now, Hyundai’s Palisade development is in the early stages. In 2019, there will be a three-row Santa Fe XL hitting the market. The Palisade will eventually replace it as the brand’s premier SUV offering.

Under the hood should be a 3.3-liter V6 producing 290 horsepower paired with an eight-speed automatic transmission. When Kia introduced the Kia Telluride concept, it had a 3.5-liter V6 engine paired with an electric motor to produce 400 combined horsepower. Then again, the Palisade could receive a biturbocharged version of the 3.3-liter engine, which produces 365 hp. There should be plenty of room under the hood. It’s the same engine int he Genesis G80 and G90 luxury models.

When Hyundai brings the Palisade to dealerships, it will compete with the Chevrolet Suburban and Ford Expedition. We should see an official debut sometime in 2019 with a production version coming in 2020.