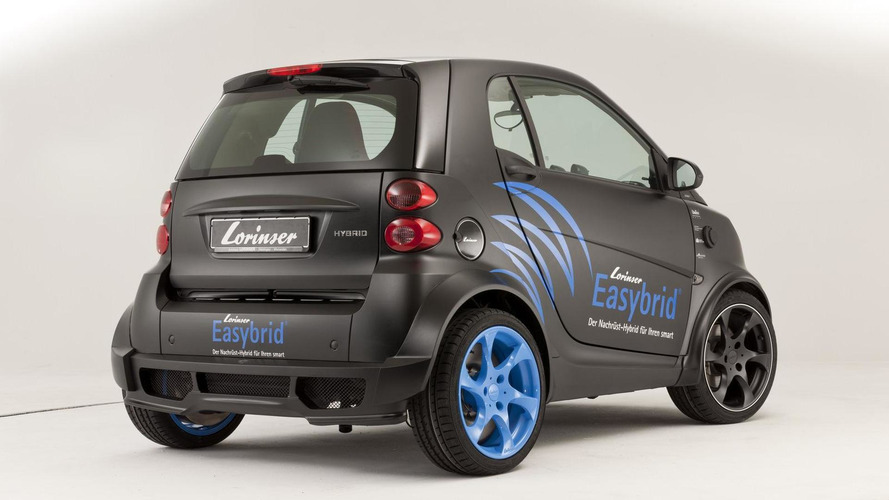 Lorinser has announced plans to introduce the Easybrid plug-in hybrid system at the Essen Motor Show.

Lorinser has announced plans to introduce the Easybrid conversion package at the Essen Motor Show.

Designed for compact cars, the Easybrid consists of a regenerative braking system, a 30 kW (41 PS / 40 hp) electric hub motor, and a lithium ion battery pack (which is stored underneath the car or in the spare wheel well). The system essentially turns a petrol or diesel vehicle into a plug-in hybrid.

Details are still being hammered out, but Lorinser expects the Easybrid system will enable a vehicle to travel up to 30 kilometers (19 miles) on electricity alone. Furthermore, the driver can choose from running on electricity, fuel, or both combined. In the latter mode, the range will be increased to over 500 km (311 miles).

The first vehicle being testing is a Smart ForTwo, but the company foresees the package being offered on the Volkswagen Polo, Renault Twingo and Fiat 500. The only major pre-condition is the car must have rear drum brakes.

Interestingly, Lorinser is considering a mobile phone-based approach where energy suppliers would own the batteries and individuals would lease them on contract. The company believes such an arrangement could lower the conversion costs to approximately €5,000. If government incentives are added, the savings could be significantly increased.