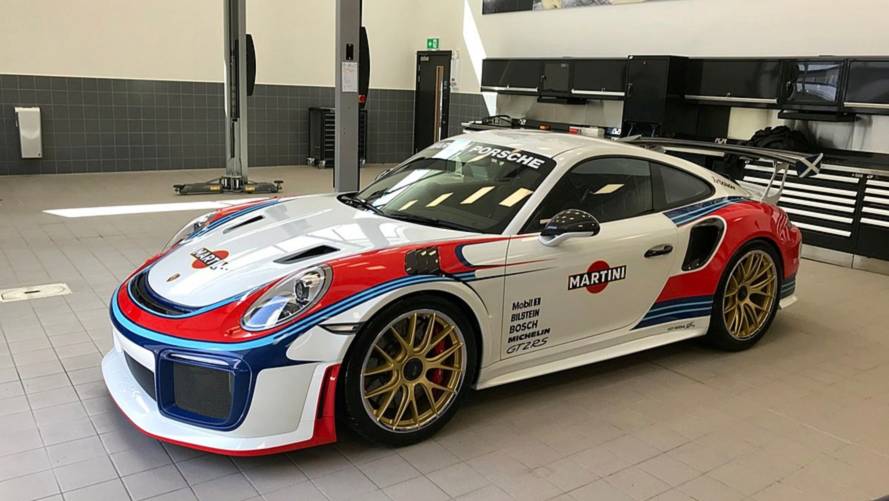 The Martini design is painted onto the GT2 RS' body; it's not a vinyl wrap.

Porsche Retail Group GB has created a one-off example of the 911 GT2 RS that wears the classic Martini racing livery with a white body and array of red and blue stripes. The style pays tribute to the classic 935/78 race car "Moby Dick." Given the popularity of the Martini paint job on Porsches, it's surprising that this is the first GT2 RS we are seeing in the classic color scheme.

According to Porsche Retail Group GB, this isn't just a simple vinyl wrap over a new GT2 RS. The company takes the time and expense to actually paint this complicated pattern onto the car. An immense amount of effort would be necessary to mask the various sections of the vehicle for applying each color. There are also custom side sills showing the silhouette of the Moby Dick, and 1978 references the year of the Porsche's competition use.

Take A Closer Look At The GT2 RS:

Moby Dick earned its name from the whale-like tail that Porsche incorporated into the 935 race car's rear. The additional bodywork lowered the vehicle's drag for optimizing the top speed, especially at Le Mans. At the 24-hour race in France, it was able to hit 227 miles per hour (365 kilometers per hour) down the straights. In '78, Moby Dick won the 6 Hours of Silverstone and was eighth overall at Le Mans.

Porsche's marketing team makes sure that no one forgets the brand's success in motorsport. For example, the company raced a pair of retro-themed 911 RSRs at the 2018 24 Hours of Le Mans – one in the Pink Pig livery and another in a Rothmans-inspired look. They scored first and second in their class, respectively.