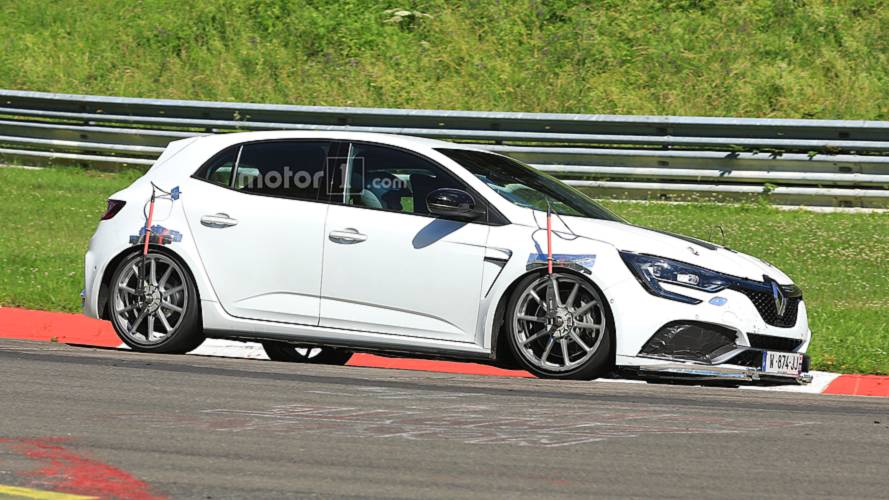 In Europe, there’s a surplus of hot hatches U.S. car enthusiasts will never get to own. It’s sad that we miss out on some fantastic cars. The Renault Mégane RS and it’s hardcore, halo sibling – the Mégane RS Trophy – are just a few such vehicles just out of reach for Americans. During the Frankfurt Motor Show last September, Renault debuted the 2018 Mégane RS – a 280-horsepower hot hatch. But even then, we knew there’d be a hotter version coming – the RS Trophy.

The first spy photos of the hardcore Mégane RS Trophy show the hatch performance testing at the Nürburgring. Details are scarce, however. When we covered the 2018 Mégane RS reveal, we suspected the Trophy to produce 300 horsepower – a 20-hp bump over the standard RS. That’s still the prevailing rumor. Somehow, Renault engineers will crank 20 more horsepower from the RS’s turbocharged 1.8-liter four-cylinder engine. We don’t know how they’ll do this but expect at least a more free-flowing exhaust, and possibly an engine remap.

The Mégane RS Trophy caught in the spy photos isn’t wearing any camouflage, which means this prototype is likely undergoing engine testing. Any aesthetic changes coming with the Trophy are probably still in development. This test mule does have a low ride height with the wheels tucked far up underneath the wheel-wells. The last Mégane RS Trophy rode on adjustable Öhlins dampers and Allevard composite springs. It’s plausible the new hatch will have a similar suspension setup of performance parts.

Mercedes-AMG may be hoping to make the A45 a hot-hatch benchmark, but it is producing a less potent AMG A35 hatch that will also create around 300 hp. The Renault Mégane RS Trophy could be setting itself up to be a rival to the AMG’s entry-level offering. If both do produce approximately 300 horsepower, it will be fun to watch the two compete head-to-head.

Hopefully, we won’t have to wait long for such a comparison. Renault should debut the Mégane RS Trophy later this year, which should lay the groundwork for a Trophy-R version to follow sometime in 2019.