Mercedes-AMG A35 Sedan Spied Keeping Camouflaged At The 'Ring 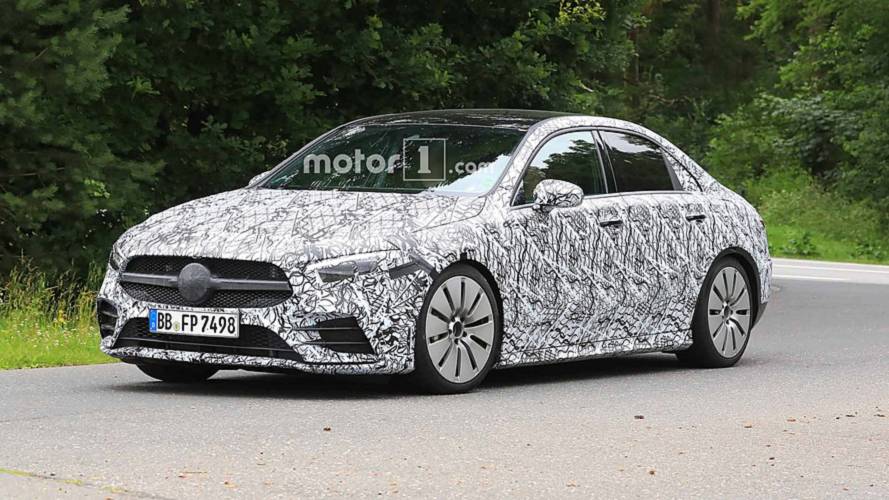 Despite already debuting the new A-Class hatchback and the long-wheelbase sedan variant for China, Mercedes-Benz still sees the need to cover the upcoming four-door in heavy camouflage during the development of the sporty A35 trim in these spy photos from near the Nürburgring.

The styling looks a lot like China's A-Class L Sport Sedan (gallery below), except at the rear where this test mule lacks the corner outlets in the lower fascia. This one also has a pair of ugly, circular exhaust pipes, but the company could easily fit more attractive parts on the final production model. A different set of wheels would help the aesthetics tremendously, too, because these pieces look too visually heavy for the model's sporty ambitions.

The A35 models of the sedan and hatchback will produce "around 300 horsepower," according to AMG boss Tobias Moers, and the company will position them to challenge vehicles like the Audi S3. To provide this power, the models will reportedly use a 2.0-liter turbocharged four-cylinder that will possibly use cutting-edge tech like an electrically assisted turbo and 48-volt mild hybrid technology.

The A35 sedan will likely debut this year and will eventually be available in the United States. Europeans will also have the choice of getting it as a five-door hatchback.

Buyers looking for even more power will have to wait for the A45 sedan and hatchback that will arrive a little later. Mercedes already confirms that it uses an all-new 2.0-liter turbo four-cylinder and has an output above 400 hp. A more sophisticated all-wheel-drive system would be the only available drivetrain. Rumors also suggest the possibility of a range-topping A50 eventually debuting with even more muscle.