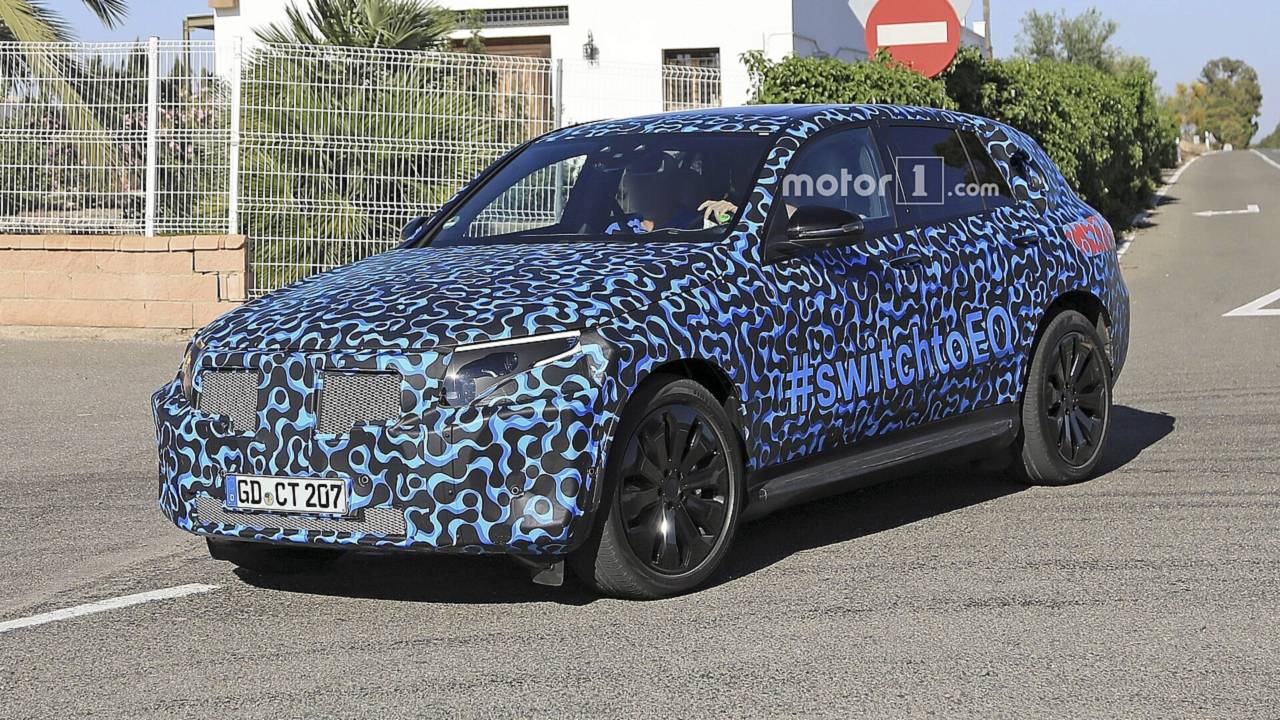 Even with all the disguise, we can clearly see the EV will look significantly different than the company's crop of crossovers.

We must be getting closer and closer to the highly anticipated world reveal of the Mercedes EQ C as a near-production prototype was spotted by our spies with an interesting body wrap instead of the boring camouflage. Flaunting the “switchtoEQ” hashtag, the test vehicle had a somewhat unusual set of wheels probably designed with aerodynamic efficiency in mind.

The black and blue body cover has a contrasting splash of color at the back where Mercedes slapped on a red strip all over the tailgate on the taillight level and we can see the tape is extending onto the rear fenders. Even though the body design still remains largely concealed underneath the wrap, the EQ C already looks substantially different than other three-pointed star SUVs, such as the similarly sized GLC for example. After all, Daimler has pledged to visually distinguish its EQ electric vehicles from the regular ICE-powered models and they’re living up to that promise.

Check out more about the EQ C:

The large mesh up front might trick you into believing the EQ C has a conventional grille, but being fully electric, it doesn’t need one. Pictured above, the concept had a panel mimicking the appearance of a traditional grille and we’re expecting the production-ready model to feature a similar look. At the back, the aforementioned red tape could be a clue suggesting the zero-emissions CUV will have a full-width light strip in the same vein as the showcar.

When the wraps will finally come off, the Mercedes EQ C will have to put up a good fight against a multitude of competitors in the premium segment. Relevant examples would have to be the Jaguar I-Pace and the Audi E-Tron, with the BMW iX3 to arrive in 2020 when the Tesla Model Y is also scheduled to go on sale.

If the EQ C will stay true to the concept’s technical specifications, it means power will be provided by two electric motors delivering a combined output of 402 horsepower (300 kilowatts) and 516 pound-feet (700 Newton-meters). In the showcar, the electric punch was enough to enable the crossover zap to 62 mph (100 kph) in less than five seconds. Thanks to a lithium-ion battery pack with a capacity of 70 kWh, the concept covered 310 miles (500 kilometers) between charges.

An unveiling is probably slated to take place in the weeks or months to come.