This will be AMG’s entry-level offering.

Mercedes is building a fleet of small A-Class offerings ranging from sedans to performance cars. There will be at least two AMG flavors coming – the hot AMG A45 and the more restrained AMG A35, which is the model captured here in the video. It will take on the likes of the Audi S3 While the video doesn’t give anything away, we already know a lot about the vehicle.

We know this will be the entry point for customers into the AMG family that will debut sometime later this year – possibly around the same time the U.S. A-Class is announced. The regular A-Class will be a 2019 model while the hotter AMG versions – the U.S. will likely receive both – going on sale later as a 2020 model. However, the U.S. will only receive the sedan versions. So, we won’t be getting this excellent hot hatch. 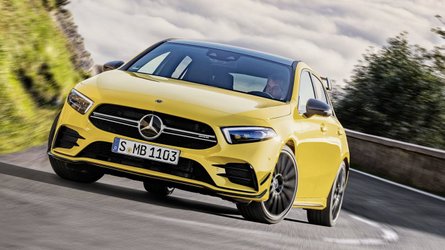 The video shows a heavily camouflaged prototype with an aggressive rear diffuser that's accentuated by a dual exhaust system. It's harder to tell any specific details at the front. However, the design should have large intakes at a minimum, and possibly a front splitter – though from the video that looks unlikely.

The A35 should be powered by a turbocharged 2.0-liter engine, which will pull triple duty by also powering he GLA35 crossover and CLA34 sedan. The A35 should produce 335 horsepower and 332 pound-feet (450 Newton-meters) of torque, which would be plenty for the compact offering. The AMG is rumored to have an electrically assisted turbo and a 48-volt mild-hybrid system with power going to all four wheels through Mercedes’ 4Matic all-wheel-drive system. The AMG A45 will have significantly more power – more than 400 hp.

We should see a slate of A-Class reveals later this year, including the U.S.-bound A-Class sedan. The reveal should happen at the Paris Motor Show in September or the Los Angeles Auto Show almost two months later. Until then, we will have to keep an eye out for any performance news that leaks. While we won’t get the hot hatch, a 335-hp compact sedan does sound fun.