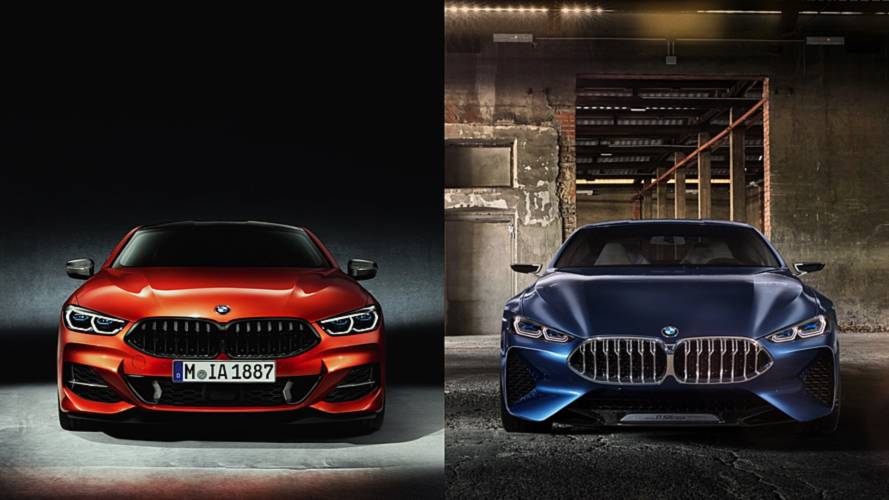 The road-going 8 Series does the 2017 concept justice.

The BMW 8-Series is back after nearly 20 years off the market – and by all accounts, it's absolutely stunning. The sharp fascia comes highlighted by the Bavarian's signature dual kidney grille, sleek LED headlights, and a large lower grille. Out back, much of the same sculpted styling can be found, from the taillights to the dual exhaust tips.

Get The Scoop On The New 8 Series:

But while the production 8 Series is all kinds of pretty, it was 2017's 8 Series concept that spawned most of these cues. The road-going 8 Series shares a lot in common with the concept that debuted last August in Pebble Beach; here’s how the two vehicles stack up side-by-side.

At first glance, a number of the same styling elements found on the 8 Series concept carry over to the production version. The dual kidney grille is connected at the center, and wrapped in a silver detailing with vertical slats on the M850i xDrive model. The Carbon Package (pictured in orange) does with more sinister black accent detailing instead.

The headlights are sleek and angular, and adopt the same dual-halo-style LED treatment as the concept. A pronounced upper LED light bar is also visible on both. The only significant feature the 8 Series dropped from its front fascia is the sculpted accenting diffusers on each end of the bumper; the production 8er instead gets a more subtle tri-grille treatment.

The side profile is one of the 8 Series' most stunning angles, hands down. The profile on the production model loses little in terms of styling from the concept – the sleek roofline and limited greenhouse both carry over. But now the 8 Series gains more production-ready features like a new side vent, sharper wheels, and taillights that wrap around the rear bumper and onto the rear-third quarter of the vehicle.

With a minimalistic taillight design, and some significant sculpting to the rear vents, the backside of the original 8 Series concept was far from production ready. Thankfully, designers were able to transform most of those cues into something far more ready for the road, and arguably more appealing.

The taillights on the production 8 Series get similar styling to the concept, but are now more embedded into the body, and come accented by white reverse lights. The dual exhaust tips remain, but are more squared off compared to the concept, and the rear vents lose some of the dramatic edges.

The inside of the original 8 Series concept, too, was nowhere near production ready, but it did give off some clues as to its final styling. For one, the same central stack design carries over; the tablet-style infotainment screen is nearly identical to the original concept, and the carbon fiber treatment and gear shifter can be found on both the concept and production model.

The steering wheel on the production 8 Series is a far cry from the concept, unfortunately, and the many silver features from 2017 have been replaced with leather instead. The seats don’t look anything like the concept either but are still sporty-enough. Here’s hoping the similar seats will carry over the M8, at least.

Whatever the case, the new 8 Series looks stunning.