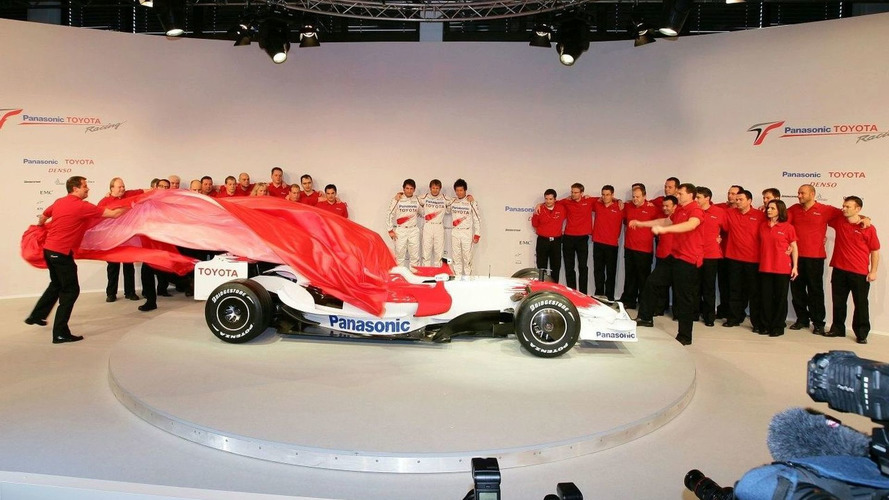 Using the renowned Toyota Way principles to encourage innovation and a spirit of challenge, the team have worked tirelessly to finalise the TF108 concept

Toyota has not had a very memorable season in 2007, accumulating just 13 points for the team. Ralf Schumacher never produced what was expected of him, and this year he couln't even manage to secure a seat with new entry Force India (previous Spijker F1). Jarno Trulli did a bit better with 8 points thoughout the 2007 season.

Chairman and Team Principal Tadashi Yamashina says: “We are in Formula 1 to win and we want to do that soon. We expect to have a truly competitive car so our drivers should be aiming to finish in the points regularly and challenging for the podium.”

The new 740 hp TF108 Formula car has a few new key features like a longer wheelbase, a major aerodynamic improvement, revised suspension and a new gearbox. Senior General Manager Chassis Pascal Vasselon explains: “The main reason for making the wheelbase longer is to achieve more stability, but secondly we also expect greater aerodynamic development potential, giving our aerodynamicists wider surfaces and more space to play with.” Of course Toyota also has to do without driver aids like traction control and engine braking.

33-year old Jarno Trulli: “I have been giving input into this car since the middle of the 2007 season, helping to develop the car to adapt to the new rules which ban traction control and engine braking. There is quite a big change in terms of electronics this year and I have spent time working with the team on this.”

New to the team Timo Gloc,who was BMW's test driver last season, said: “Even though I have not raced in Formula 1 since 2004, I have tested quite regularly so I expect it will take very little time for me to get back in the groove. I have been lucky enough to race and succeed in several different championships in my career but my goal has always been to become a full-time Formula 1 race driver.”

Third driver for the 2008 season will be the 21-year old rookie Kamui Kobayashi. He said: “Everything is just more extreme and it is a special experience to drive a Formula 1 car. When I moved to Europe to start racing formula cars my ambition was to one day become a Formula 1 driver and it feels great to say I am now a Formula 1 driver.”