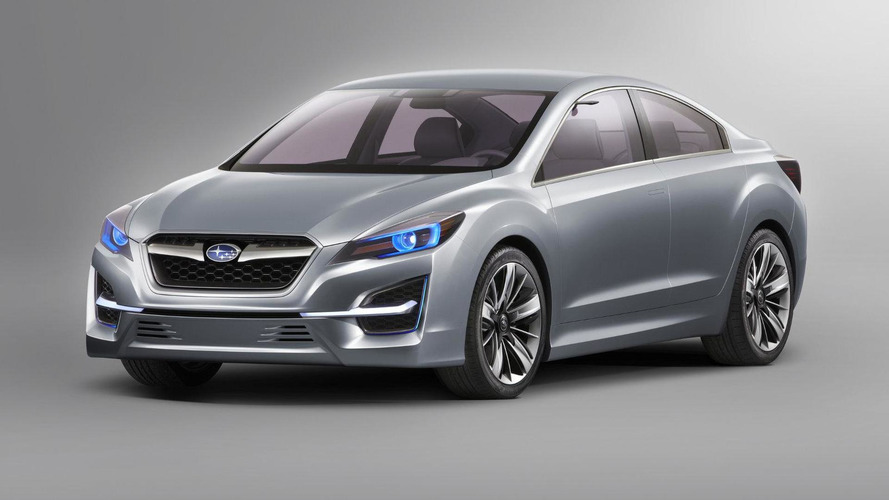 We have the first details and rendering of the new Subaru Impreza Design Concept, coming out today at the LA Auto Show.

Could Subaru finally be doing away with bland front ends when it comes to their well-known Subaru Impreza?  The answer will be a resounding "yes", if the Impreza Design Concept is well-received by the public at the Los Angeles Auto Show this month.

This also marks the introduction of the new 2.0-liter Boxer engine with the Lineartronic CVT.  The engine is a naturally aspirated, lower displacement version of the 2.5-liter 224-hp (167 kW) turbocharged engine used on the 2011 Subaru Forester.

As we told you earlier in the month when it was teased, the concept car has been built along Subaru's "Confidence in Motion" philosophy.  This is the first model produced under the new strategy.

Though this first image from the Japanese manufacturer shows off a vehicle with a bolder design, changes will certainly come before it hits the assembly line.  Neither door handles nor side view mirrors (replaced by tiny camera stalks) are present on the concept, something that seems to have been done to give the design study a more fluid appearance.

There are several things we would like to see the four-passenger four-door model carry over from concept-to-production.  For example, the fin-shaped LED fog lamps work well with the single-bar grille, all against black honeycomb mesh, seems to work on this model, as does the sporty roofline.  All four corners and the two diffusers were optimized with the help of a wind tunnel, to make the racing heritage model more aerodynamic.  Rear lighting will "follow a sharp-edged theme ... stretched into the body sides to join the character line along the flanks."

What doesn't really work is the hexagonal grille cut out at the front.  It makes the Impreza Design Concept almost Volvo-esque in appearance.  Inside, the platinum leather with blue piping and stitching has an unusual contrast to the exterior's Sky Silver paint job and bright silver aluminum wheels.  Interior features include a touchscreen infotainment unit, and multifunction steering wheel with touch panels built in.

Watch this space for more photos.