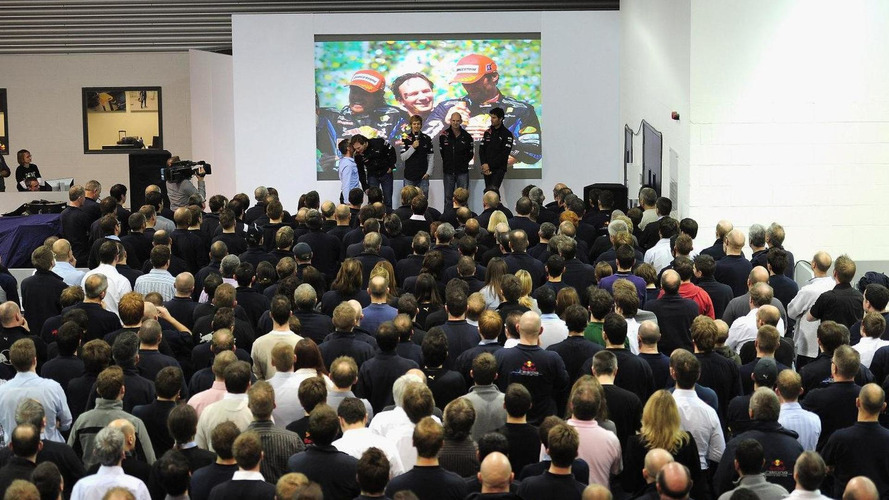 Red Bull its paying its entire staff - about 550 people - a healthy championship bonus.

Red Bull its paying its entire staff - about 550 people - a healthy championship bonus.

Media reports say the bonus for the workers at the team's Milton Keynes headquarters is 10,000 British pounds each.

"I've had a load of texts saying 'Thanks for the new kitchen'," joked team boss Christian Horner.

The bonuses, costing the team almost $9 million, will be paid out of Red Bull's extra FOM prize-money for winning the constructors' world championship.

"Championship bonuses are in every contract," Horner is quoted by The Independent. "I guess we can afford this."

The other piece of news emerging from the new F1 champions is the apparent thawing of relations between teammates Sebastian Vettel and Mark Webber.

"He (Webber) came to congratulate me (after Abu Dhabi) and showed me a lot of respect which was one of the most important things that happened," world champion Vettel revealed.

"We talked about some things that got in our way a little bit this year."

Webber is quoted by Swiss newspaper Blick: "The rivalry was maybe a bit too much sometimes. It is important that you can shake hands afterwards."

"I got a message from Bernie which said 'You've already had your gift from Ferrari so you won't need anything else from me'," he is quoted by the Telegraph.