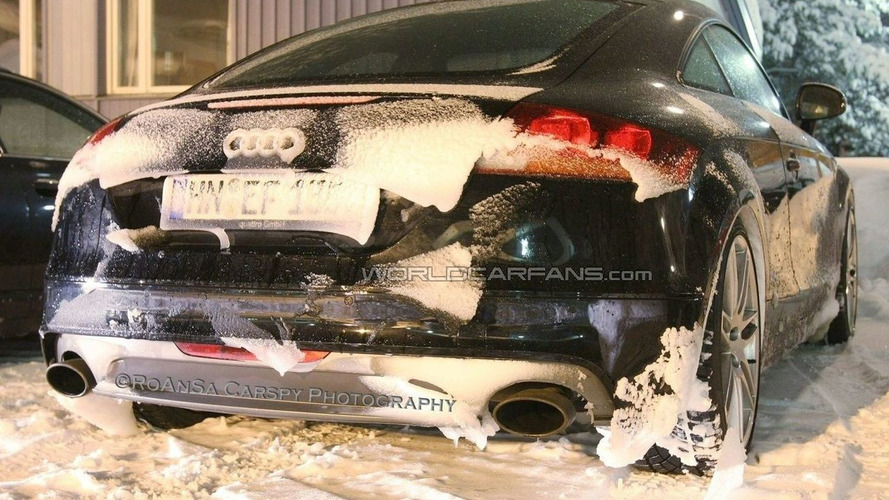 Over 365 bhp expected, with sticky grip courtesy of Quattro

Recently we saw the Audi TT S, a 2.0-litre pocket rocket of a roadster developing a healthy 270bhp/200kW via a hard-spinning turbo. Today new pictures of an even faster version of the TT, the TT RS, have been taken in Sweden amid deep snow flakes. The large, six double-spoked wheels, plus two major ovals at the rear pretty much sum up what this thing is. To top it off they used a flat-bottomed steering wheel inside these spy pictures. Ring any bells?

Speculation is rife as to what kind of engine and consequently, power will accompany its Quattro AWD system, but smart money is on two choices. A 3.2-litre V6 with a turbo strapped around it, and good for over 365 bhp/270kW, or a 2.5-litre V5 plant, with a turbo too. Manual gearbox (as pictured) is given, with a 7-speed DSG option available. In a break with Audi tradition, the TT RS will sell alongside another current-production RS car, the 571 bhp/426kW RS 6.

Volkswagen companies, including subsidiary Audi, have, in recent years, begun using small but powerful engines with turbos to push their cars faster and faster. This has applied especially to the smaller cars like the A3 and TT.