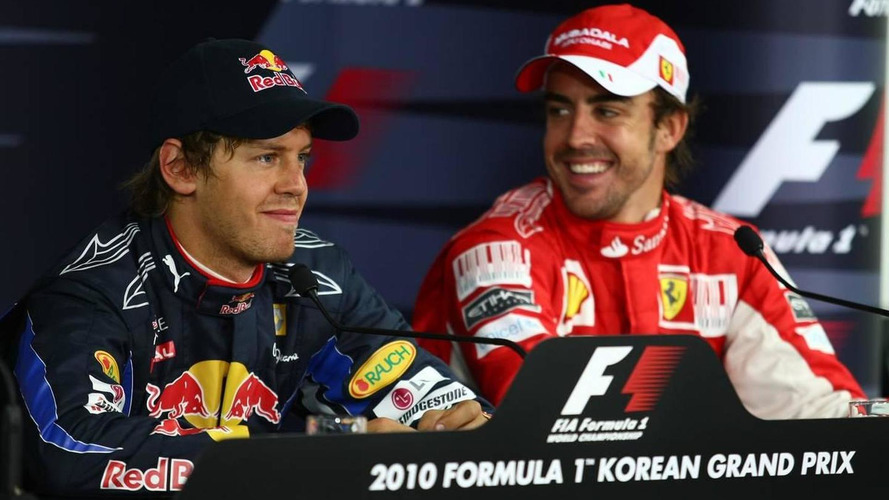 Niki Lauda has equated Red Bull's apparent approach to the Abu Dhabi finale this weekend as akin to handing the title to Ferrari.

Niki Lauda has equated Red Bull's apparent approach to the Abu Dhabi finale this weekend as akin to handing the title to Ferrari.

The energy drink company's chief Dietrich Mateschitz has been quoted as insisting it is "never a possibility" that Sebastian Vettel and Mark Webber will be asked to swap positions.

"It is a sporting choice, but in the end it is (Fernando) Alonso who will laugh," Niki Lauda, pointing out another 1-2 result with Vettel in the lead this Sunday will result in the Spaniard winning the title, told ORF.

Even Jaime Alguersuari, the Spaniard driving for Red Bull's second team Toro Rosso, said the use of a team strategy this weekend is "logical".

"I'd be very surprised if they didn't (use team orders)," he said on Spanish radio Cadena SER.

Pedro de la Rosa also thinks Red Bull would be mad to give up the opportunity of its first drivers' crown.

"Everyone can think what they like, it is my opinion that they will (use team orders)," he said.

Ralf Schumacher does not agree.

"I doubt it," answered the German when asked if he can imagine Vettel pulling over on Sunday.

"It would mean Webber becoming world champion at Red Bull before him, and defeats within your own team never feel good," he told Bild newspaper.

So while Mateschitz has ruled out team orders, less clear is what the team feels about Vettel making his own personal decision to help Red Bull Racing.

"Our drivers are team players and know that at stake is the biggest title in motor sport," added the Briton.

"I don't think it is a decision I will have to make. Ultimately, if he was in that position, it would be down to Sebastian," said Horner.

Of course, all the speculation about team orders in Abu Dhabi could prove meaningless given that Fernando Alonso can guarantee a third drivers' title if he just finishes second.

"The Ferrari should suit the track with its many fast straights," said former Swiss driver Marc Surer.

De la Rosa agreed: "That is a weak point for Red Bull. It is also why McLaren will be very strong in Abu Dhabi.

"It is a far less suitable circuit for Red Bull than many people seem to believe," added the Spaniard.