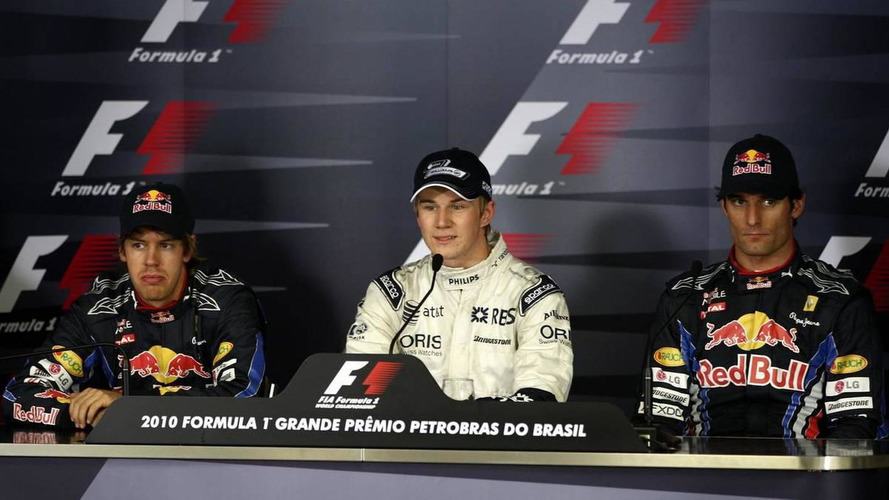 A day after Nico Hulkenberg started the Brazilian grand prix from pole, it is rumoured he is being scheduled for a test drive with the slowest team in formula one.

A day after Nico Hulkenberg started the Brazilian grand prix from pole, it is rumoured he is being scheduled for a test drive with the slowest team in formula one.

Finland's Turun Sanomat reports that, as part of the new gearbox deal for 2011, Williams' test driver Valtteri Bottas is being lined up for a test after the Abu Dhabi season finale with HRT.

The report also said Venezuelan pay-driver Pastor Maldonado could get an HRT test in Abu Dhabi in addition to his Williams drive, and that even German Hulkenberg is a potential candidate for the struggling Spanish team.

The situation is due to Williams' driver dilemma; the British team is happy with Hulkenberg and Rubens Barrichello but short of sponsors and courting the significant PDVSA backing brought by Maldonado.

Turun Sanomat cited "reliable sources" in saying Bottas, Maldonado and Hulkenberg could all drive for HRT over the four days of the forthcoming Abu Dhabi tests.

Barrichello and Hulkenberg, naturally, are hoping to stay put.

"He (Hulkenberg) deserves to be in formula one. Some people do not, but he does. He is a great talent," Barrichello told Globo.

Williams' third shareholder Toto Wolff clearly wants the team to keep Hulkenberg for 2011, describing him as "the best young driver" in F1 today.

But he admitted to motorline.cc: "Everything is open, yes."

So even with his magnificent Interlagos pole in his pocket, Hulkenberg said his future on the F1 grid is still very much clouded.

"You will have to ask Frank Williams and Patrick Head," he told Auto Motor und Sport when asked about 2011.

"I think I did everything right this weekend and that talent should come before money. I understand the financial side.

"I think Rubens and I are the perfect driver combination. I hope we can continue to be together," added Hulkenberg.