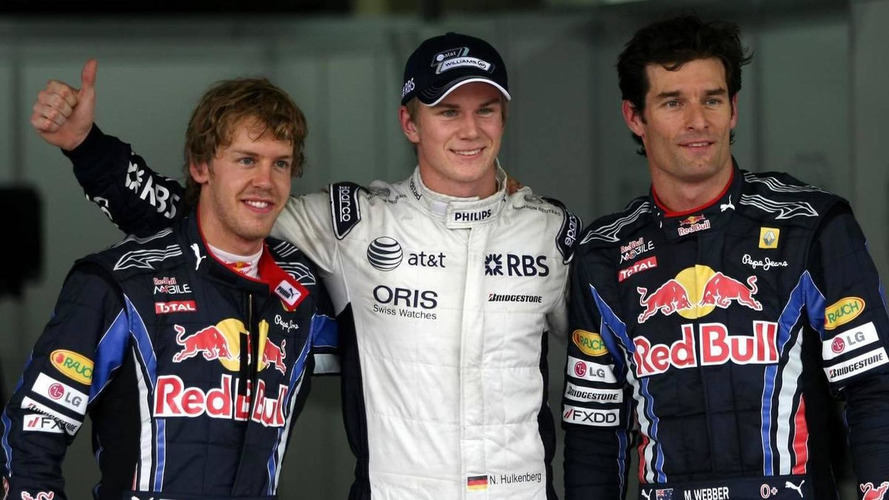 Nico Hulkenberg gave his chances of retaining his race seat at Williams in 2011 a huge boost at slippery Interlagos on Saturday.

Not only did the German rookie sensationally capture his first pole position, two of his laps in Q3 were good enough for the top spot -- with the final margin over the two Red Bulls incredibly more than a full second.

"Nico was better than all of us today," said fellow front row sitter Sebastian Vettel, and Mark Webber agreed that Hulkenberg's performance "made the rest of us look average".

One explanation for the 23-year-old's pace could be his engineer's early decision to change from intermediate to slick tyres, but his teammate Rubens Barrichello made the call first and qualified just sixth.

And all the other leading contenders were all also using dry tyres at the end.

"He put the hammer down and did the job fantastically," said team co-owner Patrick Head on BBC television, adding that Williams' first pole since 2005 will give team "fresh impetus" to further improve.

And with pay-driver Pastor Maldonado knocking on the door for 2011, Hulkenberg told reporters after qualifying that he is now "confident we'll have a positive end to that story".

Mathematically, the Ferrari driver could secure his third championship on Sunday but the Spaniard insisted that is "not really on my mind".

"You can get some strange results, but we are concentrating on increasing the gap and if we give away points, making sure it is not too many," he said.