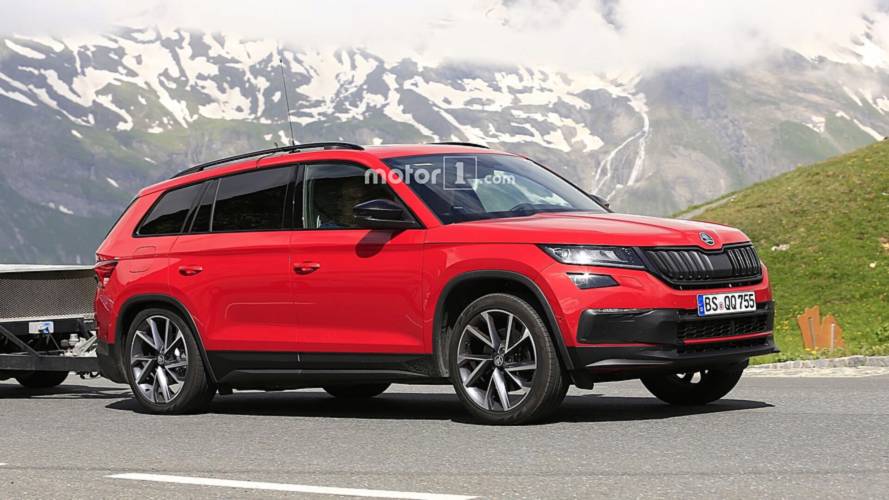 Hot on the heels of yesterday’s teaser image, the Skoda Kodiaq RS is making the headlines once again by posing for the spy camera with very little camouflage. At first you’d be tempted to say it’s nothing more the Sportline trim as it looks almost the same as the vehicle exhibited at last year’s Geneva Motor Show, right down to the red color and the 20-inch alloy wheels. “Almost” is the key word here as there are some subtle differences.

At the front, there’s some black wrap on both sides of the front bumper to conceal what we believe are bigger air vents. Look closer and you can actually see their profile as the upper edge protrudes from the bumper.

Moving at the back, the Kodiaq Sportline’s ghastly fake exhaust tips have been replaced by real ones similar to those of the Octavia RS, but a little bit bigger to match the bear’s larger footprint. The rear bumper in which these are hosted is similar to lesser Kodiaq models, so we have a feeling things will change between now and the production model’s debut.

Underneath the hood was most likely a four-cylinder 2.0-liter diesel with a pair of turbochargers. No word about how much power it will deliver, but in the Volkswagen Passat BiTDI, it’s good for 237 hp and 369 pound-feet (500 Newton-meters) of torque. The diesel will reportedly be mated only to a seven-speed, dual-clutch automatic transmission, with a six-speed manual being ruled out by Skoda if we were to rely on the rumor mill.

The “DynoTronics” red lettering on the trailer that was being hauled by the Kodiaq RS reveals the prototype was undergoing powertrain evaluation as that company is specialized in engine control units (ECU).

Even though the Kodiaq RS was teased just yesterday, that didn’t stop Skoda from dropping even more images on its media site to go along with a short article. It talks about how Sabine Schmitz was asked to take the performance SUV for a spin at the Nürburgring, but without going into any details regarding the juicy technical specifications. More info will be released on Thursday, June 14.