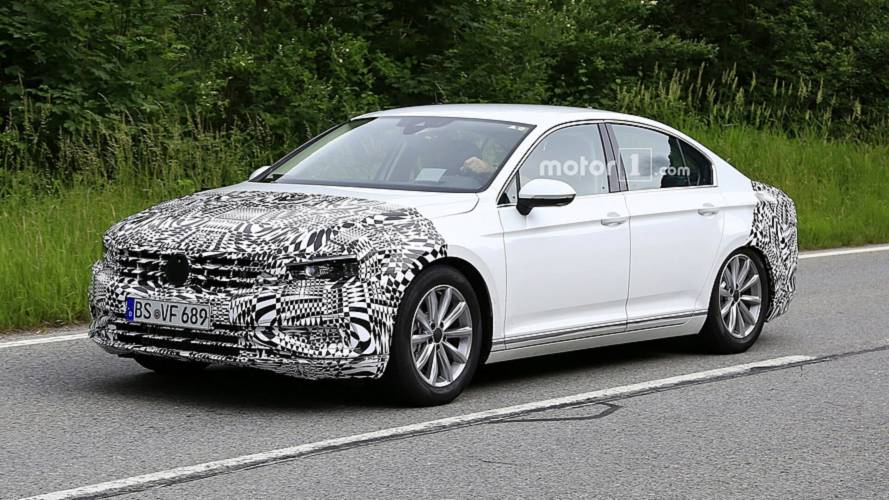 There's not much to see at this point, but it looks like the headlights and taillights are a bit different.

Confirmed to debut later this year, the facelifted Volkswagen Passat in European guise has been spotted for the first time by our agile spy photographers. The prototype had camouflage only on the front and rear fascias, which isn’t all that surprising considering mid-cycle refreshes are usually about discreetly reworked bumpers and mildly tweaked lighting clusters.

That seems to be the case with the midsize sedan from Wolfsburg as we’re already seeing the headlights are a little bit different while the taillights feature new graphics. Whether the Passat will get an Arteon-inspired front grille meeting the headlight remains to be seen, but it doesn’t look like it judging by this test vehicle as the front end treatment is very similar to the outgoing model.

We can’t help but notice the refreshed Passat was carrying a heavy load in the trunk and/or the rear seats as the prototype was riding extremely low on the rear axle. We’ve seen that before on other cars and it’s probably a method to obtain data used by automakers while testing work-in-progress vehicles.

Although we can’t have a look inside the cabin in this first batch of spy shots, we are not expecting any big changes. There’s a good chance it will get the new infotainment systems from the Golf facelift and the Arteon, but not the tech-heavy Innovision Cockpit of the 2019 Touareg as that would basically require a completely new dashboard.

There’s nothing to report just yet about the oily bits, although we won’t be too surprised if the Passat GTE plug-in hybrid will be updated to provide a longer pure electric range. It’s only wishful thinking, but we’d really like to see an R version with the new turbocharged V6 engine VW is working on for a hotter Arteon with more than 300 horsepower.

An official reveal of the Euro-spec VW Passat is slated to occur in the coming months. In 2019, North America will finally get a new Passat and it will be interesting to see whether the two cars will be related.